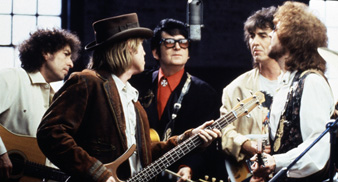 The supergroup of five guitarists that was The Traveling Wilburys are to have their music reissued for the first time in a decade.

The group consisting of George Harrison, Jeff Lynne, Tom Petty, Roy Orbison and Bob Dylan recorded Volume 1 in a ten-day period in 1988, under the made up monikers of half-brothers and supposed sons of Charles Truscott Wilbury, Sr.

The remastered and expanded version of the album that is now largely out of print in most territories will rather excitingly include rare previously unreleased tracks as well as some new mixes.

Volume 3 which was released in 1990 after Orbison’s death will also be combined with the first to create the “Traveling Wilbury’s Collection”.

A bonus DVD will also come as part of the release showing unseen footage of the Wilburys as well as their five original video clips.

The Traveling Wilburys music will be released on June 11. Rhino Entertainment will distribute the package from the Wilbury Records label.

As well as a standard package with the two discs plus DVD and 16-page collectable book, there will also be a deluxe linen-bound edition as well as a vinyl-packaged edition.

Bringing it right up to date – a digital bundle will also be available, including an interactive booklet.

The full track listing for the Traveler’s tales is as follows:

DVD – The True History Of The Traveling Wilburys
Music Videos:

She’s My Baby
Inside Out
If You Belonged To Me
The Devil’s Been Busy
7 Deadly Sins
Poor House
Where Were You Last Night?
Cool Dry Place
New Blue Moon
You Took My Breath Away
Wilbury Twist
Bonus Tracks:
Runaway (B-side to “She’s My Baby” UK CD and 12″)
Nobody’s Child (previously released on Nobody’s Child: Romanian Angel Appeal)