What’s inside the new issue of Uncut? 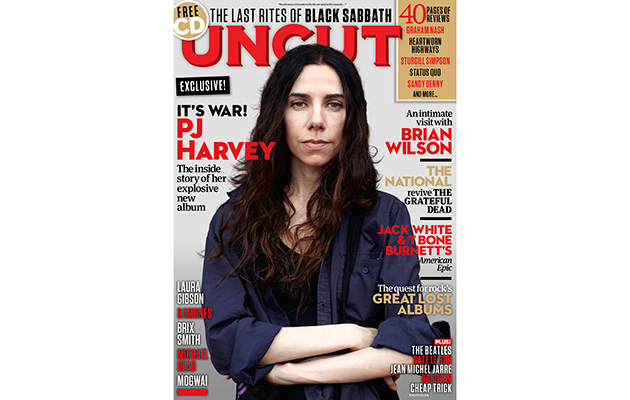 From Kosovo to Washington DC, from Afghanistan to an old rifle range, beneath London’s former tax office… The tale of PJ Harvey’s latest album is an odyssey that takes in conflict zones and art installations, with war photographers and poets along for the ride alongside her trusted corp of musicians. “There is a great openness,” says Seamus Murphy. “You have to be open to all kinds of weirdness when you go to these places.”

In this month’s new edition of Uncut, out now, Michael Bonner pieces together the gripping genesis of Harvey’s “Hope Six Demolition Project”. He revisits an ad hoc studio deep in the bowels of Somerset House, by the Thames in London, where Harvey invited members of the public to watch the sessions from behind a glass screen. “It was a really brave step to do that,” remembers her co-producer and longtime collaborator John Parish, “because you’re accepting that people may see you fuck up in a major way. And we all did some howlingly bad things in the session.”

The imaginative, sometimes fearless mechanics of actually making a record is, in many ways, the lifeblood of Uncut. This month, for instance, besides our PJ Harvey exclusive, we have the epic inside story of how The National corralled the great and good of American indie rock into making a 59-track tribute album to The Grateful Dead. Rob Mitchum, in his first piece for us, talks to the many and varied artists – among them My Morning Jacket, Lee Ranaldo, Yo La Tengo, Grizzly Bear and Dead outrider Bruce Hornsby – about the enduring power of Garcia and co’s music, and the challenges of turning on a new generation. “This could be a bridge,” says the National’s Aaron Dessner, a guiding force behind the mammoth project. “All this is about the future of this music.”

In a similar vein, we’ve got deep insights into Donovan’s “Sunshine Superman” and the backstories of Cheap Trick’s key albums, and much fascinating stuff about how Jack White, T Bone Burnett, Robert Redford, Willie Nelson and many more helped piece together American Epic, a major new show that reconstructs the way a nation’s musical roots were captured for posterity.

What else? A hike in Topanga Canyon involving the brilliant and surreal Cate Le Bon and a rattlesnake. An investigation into how the finest reissue labels track down the next musical grail; “Awesome Indiana Jones shit,” reckons Numero Group’s Ken Shipley. Sturgill Simpson, Black Sabbath, Graham Nash, Status Quo, Tim Hecker, Bombino and the Heartworn Highways movie are reviewed. And, as a poignant appendix to our Beach Boys Ultimate Music Guide, Bud Scoppa visits Brian Wilson at home in Beverly Hills, on the eve of a 50th anniversary boxset of Pet Sounds, an autobiography and what may be Brian’s final tour of Europe. All seems calm. “Brian right now is really happy,” confirm Blondie Chaplin, Al Jardine and more. But what is rock’s most storied genius really like? Uncut enters Brian Wilson’s study to find out…

Just one quick note. Among the riches on this month’s free CD – Mogwai, Kevin Morby, Konono No 1, The Jayhawks, Sturgill, Cate Le Bon, Andrew Bird, Tim Hecker and many more – you might struggle to find the Ben Watt track that’s advertised on the sleeve. Where Ben’s “Gradually” should have sat, instead there is the meditative hum of Bitchin Bajas. We’re still trying to piece together the uncanny series of events that led to this mistake, but I can only apologise here for the embarrassing cock-up: “Gradually” will be included on the next free CD.