CSS, The Hold Steady and Damon Albarn all on today's bill at Suffolk event 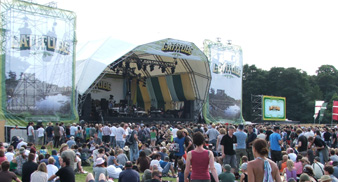 Latitude Festival day two (July 14) is getting underway, basked in sunshine and the smell of cooking meats across the campsite.

Last night, Damien Rice brought the main stage to a close, with a special rendition of Bob Dylan’s classic “I Shall Be Released.”

Damien was joined onstage by The Magic Number’s Romeo Stodart putting in his third appearance of the day – after playing the Obelisk stage himself and guesting with Midlake earlier too.

Our favourite 10th birthday-party-playing band The Hold Steady are also playing the main stage today, and we’re looking forward to another blistering performance.

Craig Finn and co’s super rise to glory is also evident in the fact that the band are playing live for Radio 4’s ‘Loose Ends’ programme being filmed backstage. Also guesting on the show this morning with them are legendary music film-maker Don Letts and actor Ian Hart.

Uncut is at Latitude Festival all weekend bringing you up-to-date blogs, news and pictures.
Check out the special Uncut Latitude blog here throughout the day Uncut.co.uk/latitude

Obelisk Arena
The Good, The Bad And The Queen
CSS
Clap Your Hands Say Yeah
The Hold Steady
Bat For Lashes