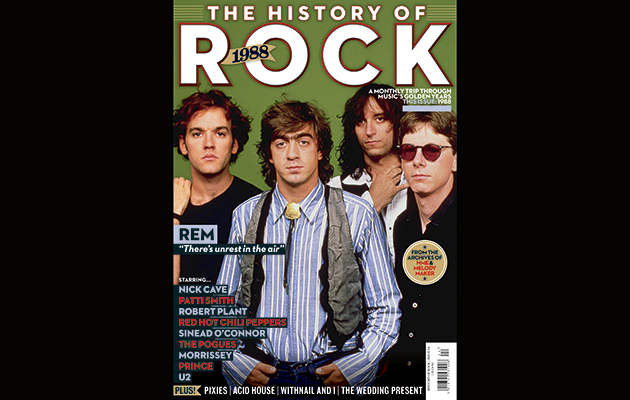 This week brings another edition of our History Of Rock sister mag; to recap, our forensic project to republish the NME and Melody Maker’s best journalism, starting in 1965 and moving, at the rate of one year in each monthly issue, towards the present day.

We’ve arrived at 1988, a year which brings REM to the cover, and includes interviews with Nick Cave, Patti Smith, Robert Plant, Townes Van Zandt, the Red Hot Chili Peppers, Sinead O’Connor, Morrissey, U2, Pixies and The Wedding Present, among many others. If you’ve missed any issues, you can find every edition of The History Of Rock on sale at our online shop: it makes, honestly, for a handsome collection. Here, as usual, is the History Of Rock’s John Robinson with his welcome to 1988…

“Among other happenings, this is a year when a new dance genre – acid house – helps create what is reported as a ‘new summer of love’. Still, the harmony, experimentation, and revolutionary spirit that accompanied that original summer of ‘67 is this year not only created by electronic artists – and is certainly not confined to the warmer months.

“Take our cover stars REM. In the space of a few years, they have grown from a lively and mysterious post-punk outfit into a concerned and influential rock band, backing presidential candidates and making a thoughtful pop record, Green. U2 continue to convince the fans in the stadia, hobnob with the greats, and exercise their power to effect change.

“Harmony exists between artists of different eras. New appearances by (and new interviews with) acts like Townes Van Zandt and Patti Smith illustrate how an enduring artist will always be able to find a place in music’s continuum. Robert Plant can even find the odd nice word to say about The Mission, produced by his former colleague John Paul Jones.

“Elsewhere, the parallels continue. Great new acts are mobilising grassroots support. A confluence is occurring between sonic and chemical experimentation. British tabloid newspapers, meanwhile, are conspiring to turn a music genre into a point of moral outrage.

“This is the world of The History Of Rock, a monthly magazine which follows each turn of the rock revolution. Whether in sweaty club or huge arena, passionate and stylish contemporary reporters were there to chronicle events. This publication reaps the benefits of their understanding for the reader decades later, one year at a time.  Missed one? You can find out how to rectify that here.

“In the pages of the 24th edition, dedicated to 1988, you will find verbatim articles from frontline staffers, filed from the thick of the action, wherever it may be.

“Taking a trip to Boots the chemist for an interviewee to sort out his methadone allowance. Buying more drinks for Peter Buck, even though he’s carrying a knife. Being uncomfortably stood upon as The Mission make their journey to the summit of American fame.

“’Sorry I stood on your bollocks earlier,’ Wayne Hussey tells the MM’s man.

“Still unchanged by fame, he indicates a nearby bowl of ice water. ‘You can dangle them in there if you want…’”