Watch The Byrds Cover Dylan In This Live Recording 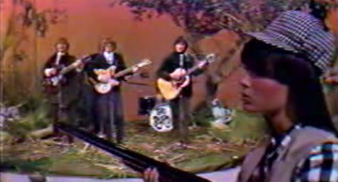 Everyday, we bring you the best thing we’ve seen on YouTube — a great piece of archive footage, a music promo or a clip from one of our favourite movies of TV shows.

This live performance was filmed for US TV programme “Hullabaloo!” which aired on November 29, 1965.

This episode was hosted by Michael Landon – who can be seen introducing The Byrds at the start of the TV clip.

The Byrds appeared twice on the same episode – they also played “Do You Believe In Magic?”

Other acts who featured on the same episode were Jackie DeShannon with “A Lifetime of Lonliness” and Paul Revere and the Raiders
with “Steppin’ Out.”

Check out the bonkers set design – complete with dogs and hunting hats, and what’s with all the straw on the floor?

Watch The Byrds in action by clicking here now