Uncut’s Essential Review Of 2019 is in shops now! 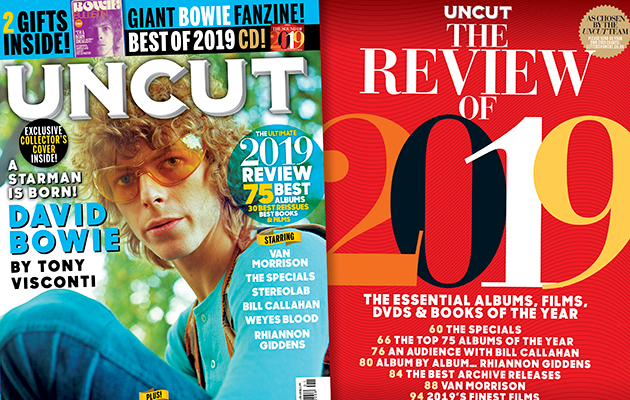 The new issue of Uncut – in UK shops today and available to buy online by clicking here – contains our staggeringly comprehensive Review Of 2019: your guide to the Best New Albums, Reissues, Films and Books Of The Year.

It’s been a particularly good year for The Specials, who’ve enjoyed a No 1 album, a massive world tour and the declaration of The Specials Day in Los Angeles. Singer Terry Hall has also celebrated the collection of his free bus pass. “I’ve wanted to be 60 since I was in my twenties,” Hall tells us. “I’ve always thought I’d make my best music in the years between 60 and 70.”

Also entering a late-career purple patch is Van Morrison, who recently released his fifth album in little over two years. “I think I started to enjoy it again,” he reveals in an unusually forthcoming chat. “It feels like there is momentum at this time.”

We catch up with one of 2019’s rising stars, Natalie Mering AKA Weyes Blood, who discusses the inspirations behind her brilliant album Titanic Rising: “It was fun to think about classic styles to talk about modern issues. We made some funny comparisons – Bob Seger meets Enya!”

Meanwhile, one-time Smog loner Bill Callahan looks back on a watershed year in which he’s revealed more of himself and played to more people than ever before: “An unusual thing about my trajectory is that the audience has gotten slightly bigger from the start, in very small increments. For me, that’s a pretty cool thing. I definitely don’t take it for granted.”

Plus Stereolab relive the highs of “Jenny Ondioline”, Rhiannon Giddens takes us through her career leading up to this year’s terrific There Is No Other with Francesco Turrisi; we mourn the passing but celebrate the legacy of wayward indie bard David Berman; plus of course we count down the 75 best albums of the year, the 30 best reissues, the 20 best films and the 10 best books.

And, lest we forget, David Bowie’s momentous 1969 is celebrated in our extensive cover story and also a double-sized fanzine – our Bowie Bulletin – that brings together some classic Bowie interviews from his stellar breakthrough year.

It’s all in the new issue of Uncut, in UK shops today with David Bowie on the cover.