Uncut have launched a new iPad app which tells the complete story of one of the greatest rock’n’roll icons of all time, Bruce Springsteen. 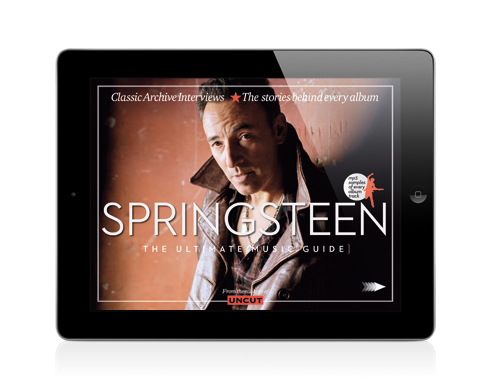 Uncut have launched a new iPad app which tells the complete story of one of the greatest rock’n’roll icons of all time, Bruce Springsteen.

‘Bruce Springsteen: The Ultimate Music Guide’ gives an in-depth overview of The Boss’ entire career, including the release of this year’s Wrecking Ball, through a host of fascinating archive features taken from classic issues of NME and Melody Maker, and new reviews of all of his studio albums. Also included in the app are a bunch of classic photo galleries, video links and playable MP3 samples of every track on his studio albums. Other highlights include ‘Introducing The E Street Band’, a fully interactive guide to each member of one of the greatest rock groups ever, and a masterclass in Springsteen collectables and rarities. The first chapter of ‘Bruce Springsteen: The Ultimate Music Guide’ is available now for free from iTunes – the other four chapters are available for 69p each.

The full contents of the app, available now on iTunes, is:

THE WILD, THE INNOCENT & THE E STREET SHUFFLE (ALBUM BY ALBUM)
Sprinsteen hones his vision as the E Street band takes shape

DARKNESS ON THE EDGE OF TOWN (ALBUM BY ALBUM)
Springsteen heads for gloomier territory on his fourth LP, tackling blue-collar troubles with resignation not rage

1985 (ARCHIVE FEATURE)
It’s 1985, and Springsteen returns to Europe for the first time in four years for his biggest shows yet, at Slane Castle

NEBRASKA (ALBUM BY ALBUM)
Back to basics and then some: the sparse 1982 classic, recorded at home in Bruce’s garage

BORN IN THE USA (ALBUM BY ALBUM)
The album that took over the world: 30 millions sales later, a fresh look at Springsteen’s biggest-selling work

1996 (ARCHIVE FEATURE)
Mid-life crisis? Springsteen – playing solo for the first time – gives NME one of his frankest interviews ever in 1996

2002 (ARCHIVE FEATURE)
Uncut meets The Boss on his farm in New Jersey to talk terrorism, The Rising and the E Street reunion

TUNNEL OF LOVE (ALBUM BY ALBUM)
1987: a deconstructed E Street Band and Springsteen’s most personal album so far

THE RISING (ALBUM BY ALBUM)
A passionate, affecting, intelligent response to 9/11

2008 (ARCHIVE FEATURE)
Uncut follows the E Street Band on tour in their Mid-Western heartland, The Boss back at the peak of his powers

DEVILS & DUST (ALBUM BY ALBUM)
2005: Dubya returns tp the White House, and Springsteen files an unflinching study of a nation on its knees

WE SHALL OVERCOME (ALBUM BY ALBUM)
The Seeger Sessions, 2006: one radical US patriot honours another

STOP ME… (ARCHIVE FEATURE)
…If you’ve heard the one about Uncut, Bruce Springsteen and Phil Spector…