Travis Head Into The Woods On Latest Tour

Fran Healy and co return with fifth album in tow 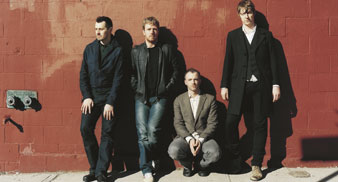 Scottish rock band Travis have announced a ten-date tour of the UK for May and June, their first full tour since 2004.

They play a handful of now sold-out dates in London, Glasgow and Warrington in March, and the new dates will kick off in Grimsby on May 15.

Just prior to the tour, the band will release their highly awaited fifth studio album “The Boy With No Name” on March 7.

Produced by longterm collaborator Nigel Godrich, the album is darker and more rounded than previous LPs. These UK shows will see the premiere of this new material live.

A track, “Big Chair” was exclusively played on Radio by guest presenter, Chris Martin from Coldplay.

Martin introduced the new track by saying, “We’re gonna finish with an incredible exclusive, we’re very privileged to play it, it’s a new song by the band Travis, the band that invented my band and lots of others.”

You can catch Travis at the following venues, they also play a set of five forest shows in June, as part of the Forestry Commission’s special Summer concerts:

Tickets for all dates are priced £ 24.50 and are available from today.