Hall And Oates bassist was 58 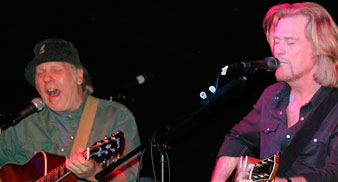 The bassist had also worked with Elvis Costello, Bette Midler, Robert Palmer, Carly Simon and Billy Joel throughout his career.

Both Daryl Hall and John Oates paid tribute to him on their official website, Hallandoates.com.

“To say that I am shocked is the ultimate understatement,” wrote Hall. “T-Bone was my musical brother and losing him is like losing my right hand. It’s not if I will go on, but how. T-Bone was one of the most sensitive and good human beings that I have ever known. And, I can truly say that I loved him.”

Oates wrote, “His character was pure and his unique and quirky personality touched everyone he encountered. His musical sensibility was peerless, any instrument that he touched resonated with a sensitivity and skill level that I have never experienced while playing with any other musician.

“He possessed an encyclopaedic knowledge of styles and musical history which he referenced to support all the artists that he played with over the years. He became our band’s musical director over time leading by example and by the deference and respect that everyone who played alongside him so rightfully accorded him.

“He made everyone he played with better. So many times when I’m working on a musical passage or part, I think to myself, ‘How would T-Bone play this?” and aspire to his level every time I perform.

“To this day I always keep one of his ‘I Love Vermont’ guitar picks with me wherever I go, and know in my heart that starting today the Heavenly Band just got one of the greatest multi-instrumentalist of all time and that band will from this day forward sound better than they ever have before.”