Bruce Springsteen, our 2017 review, Father John Misty and Hurray For The Riff Raff all feature in the new issue 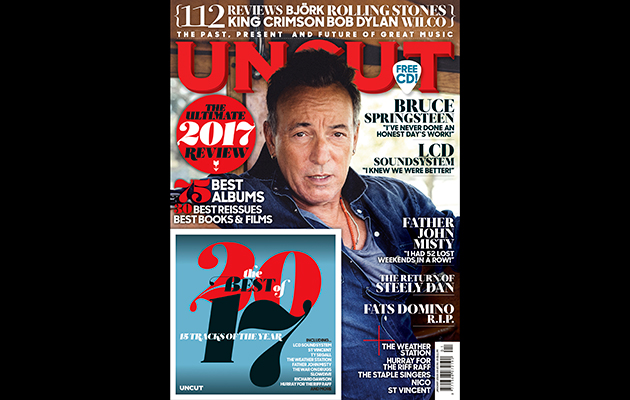 Bruce Springsteen, our review of 2017, Father John Misty and Hurray For The Riff Raff all feature in the new issue of Uncut, dated January 2018 and out on November 16.

The Boss is on the cover, and inside Uncut follows Bruce from the Jersey Shore to the Walter Kerr Theatre for his solo shows on Broadway. What does it mean to be Springsteen in 2017? Is a new album imminent? Or is his latest show a final bow?

“We have this illusion that we’re going to live forever,” says his manager. “Bruce is at a point in his life where he’s given that up.”

Elsewhere, we join Father John Misty aka Josh Tillman in Laurel Canyon at the end of a momentous year, and find out how 2017’s most divisive artist has come to terms with fame and infamy, with decadence and abstinence, from LA benders to New York exile.

“The trouble is,” he tells Uncut, “I want to live like an artist and work like an accountant. That’s really my ideal.”

LCD Soundsystem‘s James Murphy discusses his hectic year, their mighty American Dream, Bowie’s guitar tips and working with Britney Spears: “She went away to lunch and never came back…”

Hurray For The Riff Raff‘s Alynda Segarra takes us through her recording career to date, from 2008’s self-released It Don’t Mean I Don’t Love You to this year’s lavish concept album The Navigator. “This is my role,” explains Segarra. “I’m supposed to travel the world and teach people about what Puerto Rico is…”

Uncut heads to Toronto to track down Tamara Lindeman, the brilliant and poetic leader of The Weather Station. “It’s a cool time for weird women,” she says. “There are a lot of hostile feelings to express and we’re in a place now where the catharsis is happening.”

Mavis Staples and crack musicians such as David Hood and Terry Manning reveal how they made The Staple Singers‘ classic “I’ll Take You There”, while Richard Dawson unveils eight records that have changed his life, from Iron Maiden to Sun Ra.

In our news section, we talk to The B-52s’ Cindy Wilson about her new solo album, Joshua Abrams about his minimalist jazz trance, and celebrate Nico and the recently departed Fats Domino.

Albums reviewed this month include Björk – with a substantial Q&A with the Icelandic pop maverick – Jim James, Noel Gallagher, Dan Michaelson and Robert Finley, while we also take a look at archival releases from the likes of Wilco, Bob Dylan, King Crimson, The Rolling Stones and Grandaddy.

Films and DVDs covered include Monterey Pop, Bottle Rocket and Yorgos Lanthimos’ The Killing Of A Sacred Deer, while Uncut also catches live sets from St Vincent and Steely Dan, returning after the death of Walter Becker.

This month’s free CD, The Best Of 2017, features some of the finest music of the year, from LCD Soundsystem, St Vincent, Ty Segall, The Weather Station, Father John Misty, The War On Drugs, Slowdive and Juana Molina.

The new Uncut is out on November 16.