The Summer Of Love remembered, Chuck Berry, Fleet Foxes and Twin Peaks are all in our brand new issue 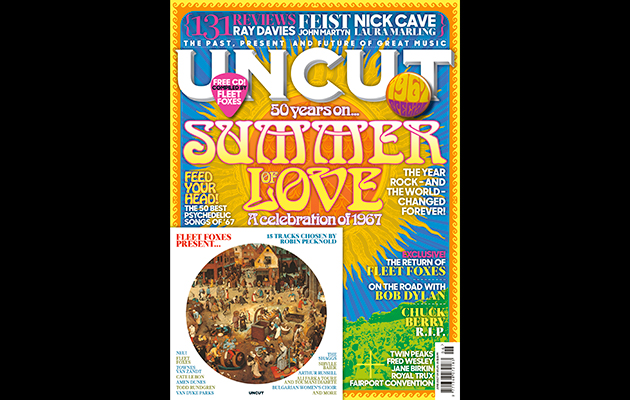 The Summer Of Love remembered, Chuck Berry, Fleet Foxes and Twin Peaks all feature in the new issue of Uncut, dated June 2017, which is now available in shops and also to buy digitally.

In our cover feature, we celebrate the 50th anniversary of 1967’s Summer Of Love, talking to the musicians, promoters and scenesters who were there. Plus, we count down the 50 essential songs from the Summer Of Love, from The Seeds to The Smoke, and including The Beatles, The Rolling Stones and Pink Floyd.

In tribute to the late Chuck Berry, we look at how the pioneer embodied rock’n’roll right up until the end of his storied life, with the help of some of his closest collaborators. “Berry has as much to say about life and death as Cash and Bowie and Cohen did on their final albums,” writes Stephen Deusner.

Uncut also meets Fleet Foxes, returning with their long-awaited third album, Crack-Up: “There are times on this record,” admits Skyler Skjelset, “when you can hear Robin [Pecknold] losing it…”

Angelo Badalamenti and Julee Cruise take us through the strange story of the theme song for David Lynch‘s Twin Peaks – how a rodent-infested studio produced music for people to make love to… “David Lynch thinks music is more beautiful if it’s slower – I felt like I was playing in reverse,” says Badalamenti.

Elsewhere, as Bob Dylan begins his latest European tour, we go native with the Bobcats in Stockholm and discover new perspectives on this enduringly provocative Nobel Laureate.

Fairport Convention answer your queries on their 50th anniversary, hanging out with John Bonham, craft beer vs real ale, and how they coped with the departure of Sandy Denny.

Jane Birkin chooses the songs that have soundtracked her life, from Elvis Presley to Serge Gainsbourg – “I think Serge knew he was probably the best lyricist alive,” she says.

In our Reviews section, we take a look at new albums from Feist, Paul Weller, Perfume Genius, Ray Davies and Joan Shelley, and archival releases from Nick Cave And The Bad Seeds, Johnny Cash, Alice Coltrane, John Martyn and more.