The 101 weirdest albums, Ryan Adams and Grandaddy all feature 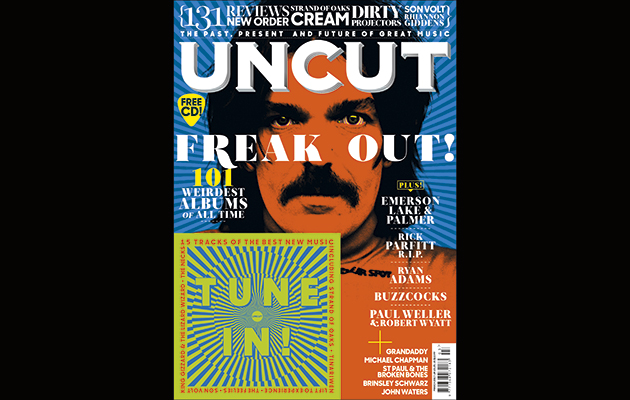 The 101 Weirdest Albums, Ryan Adams, Emerson Lake & Palmer and Grandaddy all feature in the issue of Uncut, dated March 2017, and out now.

Uncut‘s list of the 101 Weirdest Albums Of All Time is on the cover, and inside we uncover the strangest albums ever created, from Lucifer, The Shaggs and Magma to Sonic Youth, Pink Floyd and The Beatles.

“Chaos is the operative word,” writes Rob Mitchum of our Number One spot, “as the rapid-fire songs follow dream logic and pull ears in opposing directions: whimsical and depraved, polished and crude, lush and abrasive, hard rock and showtunes…”

Elsewhere in the issue, Ryan Adams reflects on the latest chapter of his extraordinary career, and his new album, Prisoner. ““I should’ve been having a really horrible time,” he tells Uncut of this most unusual divorce album, “but instead I was having the best time!”

In one of his last ever interviews, the late Greg Lake, along with Carl Palmer and manager Stewart Young tells Uncut the full story of Emerson Lake & Palmer‘s “Fanfare For The Common Man”, from jamming around one microphone in Switzerland to touring – and then having to dismiss – an entire orchestra.

Grandaddy mainman Jason Lytle also takes us through his finest recorded works, explaining how he wrote and recorded albums such as The Sophtware Slump, Under The Western Freeway, Sumday and the band’s new record, Last Place. “I wanted to avoid being the manager of a McDonald’s more than anything else,” he says.

Four decades after the “Spiral Scratch” EP, the Buzzcocks recall their punk-rock revolution, while John Waters looks back on an eventful life: “I guess I’m the Bob Hope of punk,” he says. “I always felt more comfortable in the punk world even than in the gay world – the punk world was always downright gay, anyway.”

Uncut also heads up to the wilds of Northumberland to hear all about Michael Chapman‘s 50 years as a professional musician. The restless maverick’s story takes in everything from a rock’n’roll band dressed as teddy bears to the Black Panthers, with walk-on parts for Mick Ronson, John Martyn, Nick Drake and ELP. “I have,” he admits, “a very low boredom threshold…”

Also in the issue, Uncut pays tribute to Status Quo‘s Rick Parfitt, alongside George Michael, Greg Lake and The Beatles’ first manager Allan Williams, while St Paul & The Broken Bones reveal their music that has shaped their lives.

Our mammoth reviews section looks at new albums from Tinariwen, Dirty Projectors, Strand Of Oaks, Son Volt and Rhiannon Giddens, and archive releases from the likes of Lift To Experience, Cream and New Order, while we also check out DVDs and films on Ray Davies and Arcade Fire, and the latest books. In our live section, we check out Paul Weller and Robert Wyatt, out of retirement for a benefit show.