The Rolling Stones, Gillian Welch, Phil Collins and the best of 2016 are all featured in the new issue 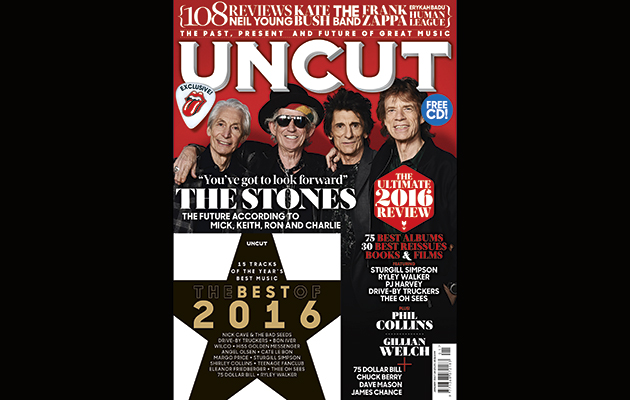 The Rolling Stones, Gillian Welch, Phil Collins and the best of 2016 are all featured in the new issue of Uncut, dated January 2017 and out now and available to buy digitally.

“Blues purists?” says Keith. “I’ve always had a problem with those cats.”

As she prepares to release her archival Boots 1 record, Gillian Welch takes a look back at her impeccable work to date in our ‘album by album’ feature, discussing Time (The Revelator), The Harrow & The Harvest and more.

Phil Collins talks us through his extraordinary career elsewhere in the new issue, as the singing drummer prepares for a dramatic return to action in 2017.

With 2016 drawing to a close, we count down the best releases of the year, including the Top 75 new albums, the top 30 archival releases and the best films, DVDs and books. What can be Uncut‘s No 1 album of 2016?

Meanwhile, also in the new issue, Drive-By Truckers recall the creation of “Let There Be Rock” – “it was the day everything changed” – and Ryley Walker answers your questions in our Audience With… feature.

Our Instant Karma section includes Chuck Berry, Dave Mason, James Chance, St Thomas and 75 Dollar Bill, while Thee Oh Sees‘ John Dwyer lets us in on the albums that have shaped his life.

PJ Harvey and Sturgill Simpson are caught live, while books from Robbie Robertson, Johnny Marr and Woody Woodmansey are also reviewed. Peter Green and Frank Zappa are among the artists featured in our DVD, Blu-ray and Films sections.