Kurt Cobain, Bob Dylan and PJ Harvey all feature in the new issue 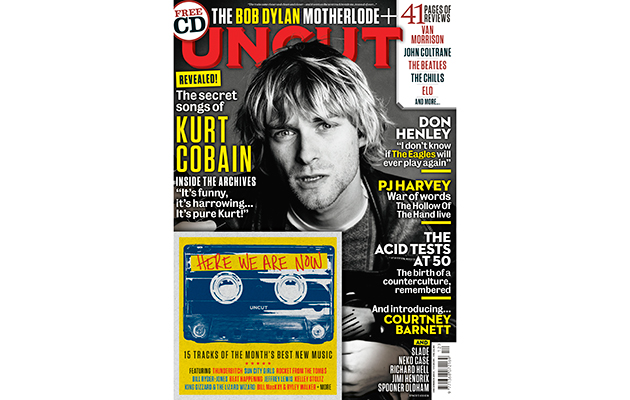 Kurt Cobain, Bob Dylan, Don Henley and Courtney Barnett all feature in the new issue of Uncut, dated December 2015 and out now.

The late Nirvana frontman is on the cover, and inside Uncut get an exclusive insight into the hours and hours of unheard material Cobain recorded on his own, some of which is now being released as The Home Recordings.

Montage Of Heck documentary director Brett Morgen guides us through the revelatory archive to tell the story of a more private and playful Cobain. “The audio album works as a companion to the film, but I believe the album exists as its own listening experience – it is its own journey.

“These were the moments when Kurt seemed to be most content – when he was by himself creating. A lot of this stuff was incredibly personal, and reflective of his state of mind.”

Bob Dylan‘s The Cutting Edge 1965-1966: The Bootleg Series Vol 12 is reviewed at length by Allan Jones in our reviews section – “this is astonishing,” he writes. “[It’s] the sound of Dylan moving at warp speed into outer space.”

Don Henley revisits his colourful career solo and with the Eagles, as he releases a new album taking him back to his country roots. Uncut heads to Henley’s homestate of Texas – “I’m a country boy,” Don tells writer Andy Gill. “If anybody has the right to do a bona fide country album, it’s me.”

Elsewhere, we travel to Belgium and the Netherlands to meet Courtney Barnett, the staunchly independent Australian singer-songwriter, to discover just how this quiet artist is coping with worldwide attention and a summer of sweaty festivals.

“I think you’ve just got to do what feels right, without compromising your morals,” she explains. “Maybe something I’m saying is different somehow.”

Elvis Costello, Lou Reed and Morrissey all feature in our book reviews, while Billy Gibbons of ZZ Top recounts the records that changed his life.

Last but not least, the issue’s free CD, Here We Are Now, includes some of the month’s best new music, including Thunderbitch, Rocket From The Tombs, Beat Happening, Kelley Stoltz, Ryley Walker and Bill Ryder-Jones.