What's in our issue out now… 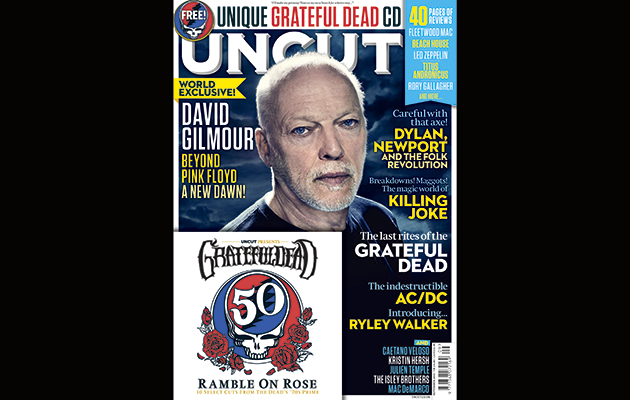 David Gilmour, the Grateful Dead, Killing Joke and Bob Dylan all feature in the new issue of Uncut, dated September 2015 and out now.

Gilmour, who releases his new album Rattle That Lock in September, discusses the end of Pink Floyd, his new record and getting older, in a world exclusive interview.

“I think I’ve found my feet,” says the guitarist, singer and songwriter. “It’s quite late in life to start finding one’s feet, I must admit. Or at least, to find them again.”

Uncut editor John Mulvey heads out on the road and in the parking lot with the Grateful Dead and their Deadheads during the recent Fare Thee Well shows.

We also hear the incredible tale of Killing Joke from the band themselves – topics covered include maggots, burned flats, gay brothels, police raids, black magic, pigs’ heads, the Great Pyramid and the restoration of antique furniture.

“There’s been overdoses, alcoholism, violence, nastiness and betrayal upon betrayal of Shakespearean proportions,” explains Youth. “But it’s a priceless legacy.”

Elsewhere, Uncut joins irreverent folk guitar troubadour Ryley Walker at a Chicago BBQ, to talk near-fatal road accidents, his “fucking terrible” album and the desire to share his music. “If I’ve got a couch, and can buy cigarettes and records, I’m the richest man in the world!” he tells us.

Brazilian Tropicália legend Caetano Veloso takes us through the greatest albums of his career, and recalls his time imprisoned and exiled by the country’s military dictatorship.

“I’ve always been very well-received,” he explains today. “But I have also had to face strong and surprisingly aggressive reactions. I have to say it’s more or less the same right now.”

The Isley Brothers reveal how they made their classic single “Harvest For The World”, a story including powerful handguns, Jimi Hendrix‘s influence and the call for “a peaceful gathering of all human beings”. “This song will always be relevant,” says Ernie Isley, “as long as the goal isn’t accomplished.”

At the front of the magazine, director Julien Temple answers your questions, Kristin Hersh remembers Vic Chesnutt, Mac DeMarco introduces himself, and the original Charlatans explain why they’ve returned. Elsewhere, Jason Williamson of Sleaford Mods reveals the eight records that shaped his life.

In our reviews section, new and archive releases from the likes of Titus Andronicus, Beach House, Drinks, Iris DeMent, Taste, Pere Ubu, Led Zeppelin and Yo La Tengo are reviewed, along with AC/DC and Fleetwood Mac live, and films and DVDs on Janis Joplin, Orson Welles and ELO.

Our very special free CD, Ramble On Rose, is a unique take on the Grateful Dead‘s legendary lost album, the end of a trilogy that began with Workingman’s Dead and American Beauty. On the free CD, then, are 10 select cuts from the Dead’s prime, many from classic concert releases.