Neil Young, Jimmy Page, Kate Bush, AC/DC and our ultimate review of 2014 all feature in the new issue of Uncut, out tomorrow (November 25). In the cover story, we look at Neil Young’s productive, strange and compelling year – with help from his close compadres Graham Nash, Frank ‘Poncho’ Sampedro and the late Rick Rosas. 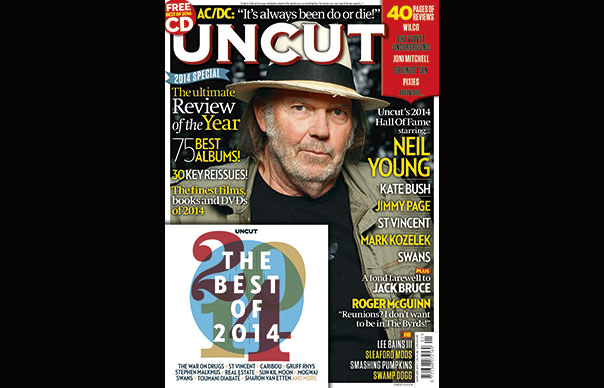 Neil Young, Jimmy Page, Kate Bush, AC/DC and our ultimate review of 2014 all feature in the new issue of Uncut, out tomorrow (November 25).

In the cover story, we look at Neil Young’s productive, strange and compelling year – with help from his close compadres Graham Nash, Frank ‘Poncho’ Sampedro and the late Rick Rosas.

After two intensely personal albums, a possibly valedictory Crazy Horse tour, some revelatory solo shows and the start of a new relationship, we look at what could come next for Shakey in 2015… “I don’t think it’s a musical decade coming up, as much as it is one of fighting for mankind…”

Jimmy Page answers your questions in a special, extended ‘audience with…’ piece, discussing his musical future, his proudest moment, occult bookshops and Robert Plant’s suggestion of a possible acoustic reunion of Led Zeppelin.

Producer Andrew Powell and a host of musicians remember the recording of Kate Bush’s 1978 No 1 single “Wuthering Heights” – “the unusualness was key, this strange girl…”

Angus Young talks Uncut through AC/DC’s new album, Rock Or Bust, and reveals more about his brother Malcolm Young’s departure from the group due to dementia.

Meanwhile, we present our review of the year, including the 75 best albums, 30 key reissues and finest films, books and DVDs of 2014, all chosen by Uncut’s staff and contributors.

St Vincent takes us through the five albums she’s recorded so far, including Love This Giant with David Byrne, and discusses her Disney soundtrack inspirations, hardcore work ethic and her experiences of playing with Mike Garson, The Polyphonic Spree, Byrne and Sufjan Stevens.

Also in the issue, Mark Kozelek of Sun Kil Moon and Red House Painters discusses his astounding 2014 album Benji, his career as a musician and songwriter and his feud with The War On Drugs, while Swans’ Michael Gira details eight songs or albums that have soundtracked his life, including music from Suicide, Howlin’ Wolf and an album of Tibetan chanting…

In our 40-page reviews section, we look at new albums from AC/DC, Smashing Pumpkins, Blake Mills, Einstürzende Neubauten, Swamp Dogg and more, while the archive reviews section features Bruce Springsteen, Pixies, Wilco and Joni Mitchell, among a host of others.

The new Uncut is out on November 25.