David Bowie, REM, Jerry Lee Lewis, The Waterboys and our preview of 2015’s essential albums all feature in the new issue of Uncut, out now. 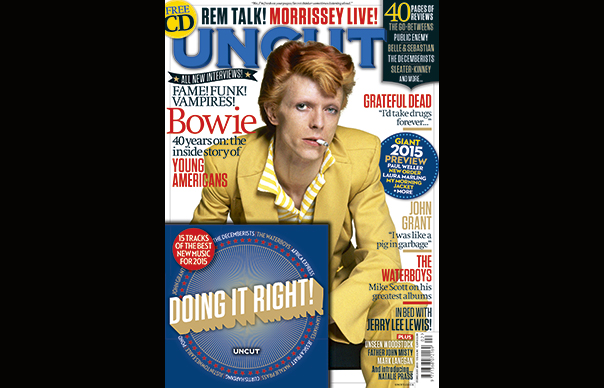 David Bowie, REM, Jerry Lee Lewis, The Waterboys and our preview of 2015’s essential albums all feature in the new issue of Uncut, out now.

Bowie is on the cover, and inside we tell the full story of Young Americans, 40 years on.

Also in the issue, REM explain how they made their 1987 breakthrough hit “The One I Love” – from “Smokestack Lightning”-influenced guitar solo to MTV-friendly video – while Uncut is invited round to Jerry Lee Lewis’ house to discuss Chihuahuas, the best mixture of fluids for setting fire to pianos and why he could never have been as big as Elvis Presley…

Mike Scott takes us through The Waterboys’ discography album by album, recalling creative sojourns in Ireland, London, New York and beyond.

“We’re very likely to make an album that follows on from the Fisherman’s Blues tour,” Scott says. “I’ve already got the songs stockpiled for that.”

This issue also features our 2015 albums preview, with artists including Paul Weller, Laura Marling, New Order and My Morning Jacket dishing all the details about their forthcoming releases.

As the Grateful Dead’s 50th anniversary begins, we delve back into the archives to uncover a seminal 1989 Melody Maker interview with Jerry Garcia and his engaged, ultra-hospitable bandmates, to talk about George Bush, David Crosby, the rainforest, Bob Dylan and, of course, acid.

Our 40-page reviews section features pieces on new albums from Belle & Sebastian, Sleater-Kinney, Panda Bear, Natalie Prass, Pond and The Decemberists, and archive releases from The Go-Betweens, Public Enemy and Paramount Records, while we catch Morrissey and Jackson Browne live in concert.

The magazine also comes with a free CD of some of the best new music for 2015, featuring John Grant, The Waterboys, The Decemberists, Pond, Liam Hayes, Jessica Pratt and more.

The new issue of Uncut is out tomorrow (December 30).