The new issue of Uncut, out now, features Bob Dylan, Morrissey, The Flaming Lips and Nilsson. 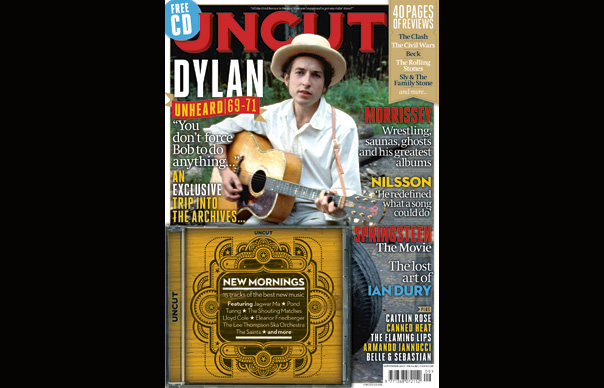 The new issue of Uncut, out now, features Bob Dylan, Morrissey, The Flaming Lips and Nilsson.

Bob Dylan is on the cover, and inside Uncut editor Allan Jones gives us an exclusive look at the new instalment in the Bootleg Series, Vol.10: Another Self Portrait.

The musicians who played on Dylan’s albums from the period, including Al Kooper and Charlie McCoy, also tell of their varied experiences working with the singer-songwriter.

Morrissey’s collaborators reveal the truth behind the making of his classic first few solo albums, including Viva Hate and Your Arsenal – wrestling, feeding cows and strict aesthetics all feature.

The Flaming Lips explain the creation of “Do You Realize??”, the standout from their 2002 album Yoshimi Battles The Pink Robots and reveal why they believe it is “prophetic, a warning”.

Elsewhere, Armando Iannucci answers your questions, we travel to Nashville to meet country queen Caitlin Rose, and take a look at the new film about Bruce Springsteen.

Belle & Sebastian’s Stuart Murdoch also reveals the records that changed his life, while Linda Thompson explains what it’s like working with her ex-husband, Richard Thompson, again.

The Clash, Sly & The Family Stone, Marc Bolan, Pond, Ty Segall, Julian Cope, Julia Holter and Booker T all feature in the reviews section, while Beck and Frank Ocean are in our live section.

The DVD and film section features Alan Partridge: Alpha Papa, Lovelace, Neil Young’s Year Of The Horse and The Returned.

The new issue of Uncut, dated September 2013, is out now.