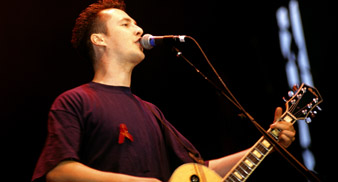 The Wonder Stuff are set to return to the live arena this year, with an appearance at Winchester’s Matterley Bowl Blissfields festival, which takes place in July.

The band, who have been on indefinate hiatus whilst guitarist Malcolm Treece had a child, are currently back in the studio recording a new album, which is due for release early this Summer.

The as-yet-untitled LP is the band’s first since releasing ‘Suspended By Stars’ in 2006, which coincided with The Wonder Stuff’s 20th anniversary.

Frontman Miles Hunt and Treece are the only original members of the band remaining. Andres Karu, Mark McCarthy and Erica Nockalls who joined the band in 2004 are the current line-up.

Award-winning dance festival Blissfields Festival is this year moving to the bigger site of Matterly Bowl, and other artists confirmed to play are Roni Size: Reprazent and The Whip.