The Who are to release a seven-inch boxset of their first seven singles, the first in a proposed series of four sets. 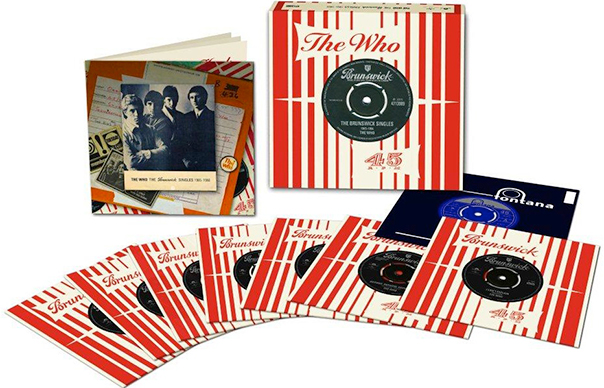 The Who are to release a seven-inch boxset of their first seven singles, the first in a proposed series of four sets.

The boxset, entitled The Brunswick Singles 1965-66, covers from “I Can’t Explain” to “La-La-La Lies”, with a bonus disc featuring their only release as The High Numbers, “Zoot Suit”/”I’m The Face”.

As well as the boxset, which comes out on April 6, the group will release all of their studio albums on 180g vinyl, plus a double-LP edition of their recent Who Hits 50 compilation, on March 23.

The remastered editions include their original artwork, and some even feature replica promotional memorabilia, such as The Who Sell Out, which includes the original 20″ x 30″ poster as an insert.

As part of Record Store Day on April 18, 2014, the group are also releasing a limited-edition blue vinyl seven-inch of their “Be Lucky” track from Who Hits 50, backed with their debut single “I Can’t Explain”.