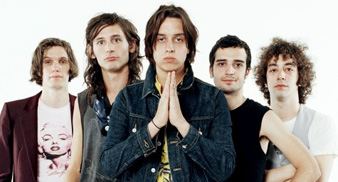 The Strokes played their first gig since October 2006 last night (June 9), performing a secret show under the alias Venison at London‘s Dingwalls venue.

The New York five-piece had flown into the UK capital to prepare for headline slots at the Isle Of Wight Festival on Saturday (June 12) and RockNess on Sunday. They announced the London gig yesterday, with the show selling out almost instantly last night, reports Uncut‘s sister-title [url=http://www.nme.com/news/the-strokes/51445]NME[/url].

Frontman Julian Casablancas wore sunglasses and a studded leather jacket throughout the set, while guitarist Nick Valensi wore a garish orange jacket with a tiger design. Guitarist Albert Hammond Jr had grown his hair since recently shaving it and wore a smart suit blazer.

The frontman was slight on between-song chat, though he did note the large number of people who had piled to the front for the best views. “You guys alright there?” he asked the front row, joking: “There’s a dead guy there… but it’s cool, keep going.”

The band’s set included the likes of ‘You Only Live Once’, ‘Last Nite’, ‘Take It Or Leave It’ and New York City Cops.