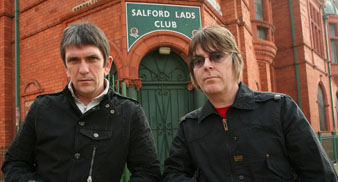 A new documentary about The Smiths, as told by the band’s former rhythm section; Mike Joyce and Andy Rourke, is to be released on DVD next month.

“Inside The Smiths” tells the history of the band, and describes what it was like working with Morrissey and Johnny Marr. Mike Joyce says the reason he and Rourke have spoken for the first time on camera was that: “We wanted people to know what it was really like. It is more truthful than anything we have revealed in interviews before because we were relaxed with how it was done and who was doing it.”

The documentary includes contributions from original Smiths snapper Stephen Wright, and in depth interviews with the former Smiths as well as musician friends and fans such as New Order’s Peter Hook, The Fall’s Mark E Smith and Buzzcocks’ Pete Shelley.

Younger artists such as Kaiser Chiefs’ Ricky Wilson and Ordinary Boys’ Preston offer their thoughts on the legacy of The Smiths too.

Produced and directed by Manchester-based friend Stephen Petricco, “Inside The Smiths” will premiere at two free screenings around it’s release date of July 16. The screenings will include a Q&A session.

They take place in Manchester at TV21, Thomas Street on July 15 and at Fopp, on London’s Tottenham Court Road on July 18.

And as for that reunion? Rourke and Johnny Marr played on the same stage at the Manchester Evening News Arena this March, at a charity event organised by Rourke. He says ““Never say never. A lot’s happened but, well, you just never know.”