Arctic Monkey Alex Turner joins them at London show too 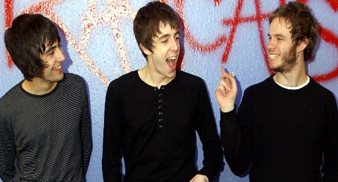 Hotly-tipped newcomers The Rascals are to headline a launch party for Liverpool Sound City next week.

The Rascals’ Miles Kane has been working on an album with Arctic Monkey Alex Turner, the collaboration being slated for release in April. Turner surprised fans at The Rascals’ London show last night (February 8), joining them onstage for final track ‘Is It Too Late’.

The Sound City launch show at Liverpool’s Barfly next Thursday (February 14) is also set to feature The Delta Fiasco, Erza Bang and Hot Machine as well as DJ sets from the likes of the Klaxons.

Announcements about this year’s four-day music festival and conferencce are expected to be revealed on the night.

Taking place from May 27-30, Sound City is set to feature hundreds of artists with performance spaces being set up all over the city. The daytime conferences will take place at the newly opened Beatles-themed hotel Hard Days Night.

Sound City will also become the first ever festival to be broadcast simultaneously through website Second Life.

Festival partners Creative Cultures have virtually recreated all of the venues that will be used, so fans can log on and watch the bands ‘live’ from anywhere in the world.

More details about Sound City, and for launch party tickets, check out the website here: www.liverpoolsoundcity.co.uk