The Queen Rules As Mirren Picks Up 24th Award For Role

What we learned from the BAFTAs last night 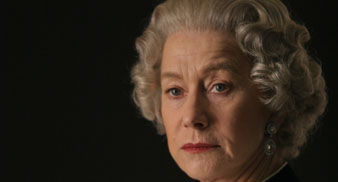 Jonathan Ross was a poor replacement for the mighty Stephen Fry.

Not one of the presenters appeared able to read from an autocue.

The cultural chasm between England and America was highlighted by the “You say ‘tomayto’, I say ‘tomahto'” push-and-pull of how to pronounce Babel: “Bay-bell” or “Bah-bell”? In the end, Alejandro Innaritu’s piece of mereticious clap-trap failed to nab any of the top awards, so perhaps it doesn’t matter.

Eva Green’s hair might just be the scariest thing we’ve ever seen. Possibly worthy of its own blog. Elsa Lanchester’s Bride of Frakenstein as reimagined by Crazy Meg of Bedlam.

Kylie’s blue dress was made out of metal.

The BAFTAS are essentially like The Brits. An excuse for much industry back-slapping and a

There were no great surprises at last night’s awards, and Dame Mirren’s Oscar momentum now seems unstoppable. Including the BAFTA, she’s won 24 awards for her portrayal of Elizabeth II in Stephen Frears’ picture, which also won Best Film.

Forest Whitaker, another likely winner at the Oscar for his portrayal of Idi Amin, picked up the Best Actor award for The Last King Of Scotland.

We were pleased to see Little Miss Sunshine get 2 awards — for Best Original Screenplay and Alan Arkin for Best Supporting Actor — although it stood little chance against the homegrown might of The Queen in any of the big categories.

But which films will do well next year? We’d very much like to see Shane Meadows’ brilliant Eighties-set skinhead drama, This Is England, receive serious acknowledgment. Apart from Andrea Arnold receiving the Carl Foreman Promising Newcomer award for Red Road, Britain’s independent scene was disappointingly under-represented. An award next year for Meadows would show the BAFTAs can see beyond the box office receipts and big name glamour and reflect cinematic achievements outside the mainstream.