The band's first material for six years is ready 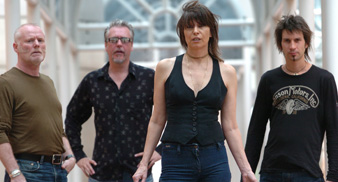 The Pretenders have completed their new studio album ‘Break Up The Concrete’, their first new material for six years, and are previewing a track a week until it’s release in September, via their website

The label have made the first album track “Boots of Chinese Plastic” available as a free MP3 from www.thepretenders.com.

Each week another new track will be downloadable.

The new album on the Shangri-La Music label will first
be released on vinyl only, then on CD in October.

The Pretenders are due to play London’s Koko on July 30,
previewing the new album as well as playing classics.