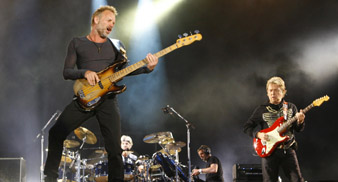 The Police closed the Isle of Wight festival last night (June 15), with a setlist jammed full of their greatest hits.

Opening with ‘Message in a bottle’, Sting, Andy Summers and Stewart Copeland played before one of the biggest crowds of the festival.

The band’s set included ‘Don’t Stand So Close’, ‘Every Little Thing She Does Is Magic’, ‘Roxanne’ and ‘Every Breath You Take’
“When I came in 1969 – I was five years old – to see Bob Dylan I got a lift with a mate from Newcastle,” said Sting. “Here I am now with The Police.”

The festival bought 55,000 people over the English Channel to see the Kaiser Chiefs play their first UK headline spot on Friday followed by the Sex Pistols‘ triumphant return to the stage on Saturday night.

The Pistols’ took to the stage accompanied by a slow-jam of ‘Pretty Vacant’ before launching into their original punk anthem followed by a brilliant rendition of ‘God Save The Queen’.

Iggy & The Stooges– featuring the original lineup of Ron and Scott Asheton plus Mike Watt on bass and Steve Mackay on Sax – spun through their hits ‘I Wanna Be Your Dog’ and ‘Raw Power’.

“I feel all right,” yelled Iggy, as he jumped and convulsed around the stage.

Now in its seventh year the event aims to recreate the spirit of the famous island festivals of the 1960s, which featured legendary performances by acts such as Jimi Hendrix, The Doors and Bob Dylan.