The Pogues launch their own Irish whiskey

"Sunlight and barley held together with water and left in an oak barrel for three years and a day..."

The Pogues have launched their own branded Irish whiskey.

Working in collaboration with West Cork Distillers, The Pogues Irish Whiskey is priced at £30 a bottle.

On the website, the distillers refer to the drink as “The Spirit of the Band, Bottled”.

“Sunlight and barley held together with water and left in an oak barrel for three years and a day. This whiskey is a measure of who we are, made with the sole intention of spreading that same raucous joy. If you’re drinking you’re welcome, pull up a seat and pour. If not, póg mo thóin.”

It continues. “As you would expect, The Pogues Irish Whiskey has as much character as the band itself. Made from a fine blend of grain and single malt Irish whiskey; this mighty drink has an aroma of malts and cracked nuts, with a sweet taste and a smooth intense flavour.”

John O’Connell, co-founder of West Cork Distillers, said: “We wanted to create an Irish whiskey with global appeal, which isn’t without its challenges”.

“The Pogues offer a perfect partnership as they share many of the same values as our company such as an independent spirit, a slightly unorthodox approach and a commitment to quality, as well as success on the international stage”. 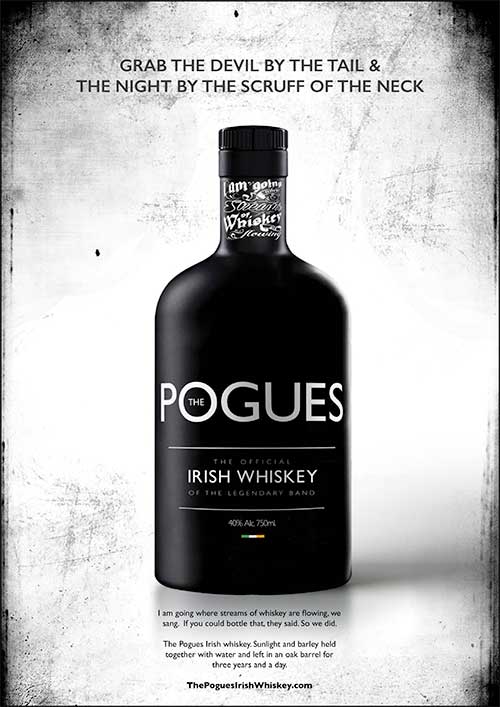 At the UK launch, the whiskey was served with names inspired by The Pogues’ hits, including “Fairytale Of New York” and “Misty Morning Albert Bridge”.

Interviewed in Uncut’s August 2014 issue, Shane MacGowan updated us on his new songs, a surprising new fitness regime and history of casual violence.

“I got my head kicked in fucking millions of times in the ’70s and ’80s,” said MacGowan. “But so did lots of people. There was a lot of violence. It was a lot of fun!

“Getting beaten up, or getting hit by a car… you get used to it, y’know. You bounce off. Hitting a motorway doesn’t really register ’til later.”

The Pogues released their last studio album Pogue Mahone in 1996, though they continue to tour. In October 2013, Phil Chevron, the band’s guitarist, died, aged 56.

Chevron, whose real name was Philip Ryan, was first diagnosed with esophageal cancer in June 2007 and had been undergoing treatment since. Despite being given an all-clear in 2008, in May 2013, it was announced that the cancer had returned.