The Last Shadow Puppets Cover Bowie And Love In Oxford 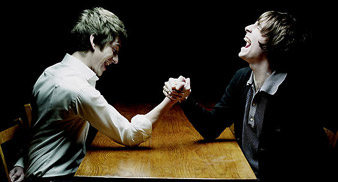 Alex Turner and Miles Kane’s Last Shadow Puppets set off on their first tour this week, and Uncut saw the second date at Oxford’s New Theatre.

It found the duo augmented by the 16-piece London Metropolitan Orchestra, who also played on “The Age Of The Understatement”, plus that album’s producer James Ford (of Simian Mobile Disco) on drums, Alex MacNaghten on bass (replacing Stephen Fretwell) and John Ashton (a member of the Arctic Monkeys crew) on keyboardss.

Miles Kane mostly played lead guitar through the hour-long set. Amongst the album tracks and b-sides, the band covered Lee & Nancy’s “Paris Summer”, Love’s “Little Red Book” and David Bowie’s “In The Heat Of The Morning”.

The gig was an all-seater affair, thougn Turner suggested near the start that, “No one’s going to tell you off if you stand up.” Eventually a solitary standing fan walked off during “Hang The Cyst”, prompting Turner and Kane to stop the song and ask him why. He muttered something about being told to sit down by stewards, which resulted in the entire audience standing up in support. The band then finished the song, barely missing a beat.