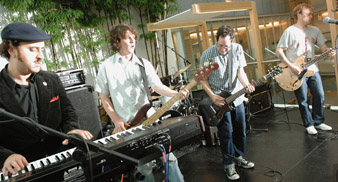 Uncut’s band of the Summer festivals, The Hold Steady are to release a special edition of their accalaimed album Boys & Girls In America next month.

The re-release of their acclaimed album will come with a bonus disc of live tracks recorded at Fingerprints, an independent record shop in Los Angeles.

The eight tracks include recent single ‘Chips Ahoy’ as well as ‘Modesto’s Not That Sweet’ which is not available on any other Hold Steady album.

A five-track EP from the same acoustic show was released in the US only this Summer.

The bonus disc tracklisting is:

This month also see’s Craig Finn and the band embark on the NME’s first Rock’n’Roll Riot tour, headlining in the US. Support acts will be the 1990s and Art Brut.

The band, who release new single ‘Massive Nights‘ on October 22, are currently finishing writing their fourth album which will be completed and released by early next year.