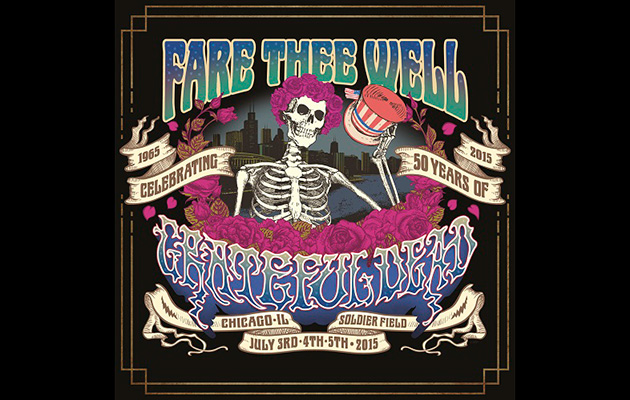 The Grateful Dead have announced details of their forthcoming box sets documenting the band’s final concerts in Chicago earlier this year.

The Fare Thee Well: Celebrating 50 Years of Grateful Dead sets will be available on November 20 through Rhino on a number of formats.

A 12-CD/Blu-ray set and a 12-CD-DVD set will be available exclusively on Dead.net the official Grateful Dead website, and will be limited to 20,000 individually numbered copies per sets.

Both sets will contain full audio and high-definition video from the band’s three shows at Soldier’s Field in Chicago on July 3, 4 and 5.

Meanwhile, 3-CD/2 Blu-ray, 3/CD-DVD, 2 Blu-Ray or 2-DVD sets will be released in shops and digitally which include full audio from the band’s final show on July 5.

A 2 CD/digital Best Of edition will feature highlights from all three shows. You can order it from Amazon.co.uk by clicking here.

12-CD/7-DVD Complete Version – Full audio and video from all three shows on CD and DVD plus exclusive bonus DVD of behind-the-scenes footage and three CDs of intermission music by Circles Around The Sun. Individually numbered, limited edition of 20,000.