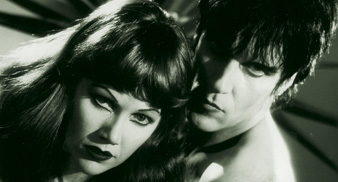 A near obsessive passion for rough-hewn rockabilly and schlocky horror B-movies may not sound like the most obvious template on which to build a lasting music career, but it kept The Cramps busy for the best part of three-and-a-half decades. Almost oblivious to changing fads and trends, the group stumbled into a twilight world somewhere between “Great Balls Of Fire” and The Creature From The Black Lagoon and decided to stay there.

Lux Interior – born Erick Lee Purkhiser just outside Akron, Ohio, and taking his stage name from a TV ad description of a Chevrolet – formed the band in the mid-1970s after picking up hitchhiker Kristy Wallace in California. Discovering they were both enrolled on the same course at Sacramento City College (which he claimed was called “art and shamanism”), they parlayed their shared interests into a group that was as much a reaction to the music scene as it was a platform for their own ideas.

“I have nothing to do with these bands that call themselves new wave when all they are is a bunch of snotty-nosed little art students that don’t care anything about rock ‘n’ roll,” he told NME in 1980. “We’ve loved rock ‘n’ roll all our lives, and this band is the end of it. We’re not using the band to get into galleries or become mime dancers or anything. We want to be a rock ‘n’ roll band, and I’ll do it ‘til past when I’m dead.”

Kristy was reborn as Poison Ivy Rorschach (the pair would later marry), and The Cramps set about chronicling white trash culture to a garage punk beat. Songs like “I Was A Teenage Werewolf”, “Goo Goo Muck”, “Can Your Pussy Do The Dog?” and “I Ain’t Nothin’ But A Gorehound” embraced all things low-brow, but there was nonetheless wit, intelligence and sophistication at work somewhere in the mix. One of their most enduring numbers, “Naked Girl Falling Down The Stairs”, was inspired by Marcel Duchamp’s 1912 painting Nude Descending Staircase.

Releasing two independent singles produced by Alex Chilton in 1977, the band went on to sign for Miles Copeland’s IRS label and made their UK bow with the 1979 EP Gravest Hits, but it was two 1983 albums, Off The Bone and Smell Of Female, that brought them to a wider audience, followed by 1985’s A Date With Elvis, perhaps their best-loved work.

Mainstream success eluded them, but their cult following was always devoted. One ardent fan, serial killer John Wayne Gacy wrote to them regularly, even sending gifts of paintings from Death Row. Ultimately, the band became part of the kitsch world they so lovingly celebrated, even cropping up in an episode of Bevery Hills 90120 (entitled “Gypsies, Cramps and Fleas”), while Lux himself got to voice a character in Spongebob Squarepants.

But it was as a live act that they’ll be best remembered, with Lux’s menacing scowl and athletic moves borrowed wholesale from his teenage idol Iggy pop commanding the stage, while Ivy, attired as a monster movie burlesque dancer, crunched out guitar riffs at his side. They were pioneers of psychobilly (a label Lux always held in disdain) whose stripped-down less-is-more approach harked back to their early heroes Jerry Lee Lewis and Gene Vincent, but equally informed the spirit of many who followed in their wake. It’s impossible to listen to early White Stripes albums without recalling the good-natured frights and maniacal howls Lux so deliciously delivered.

Log in to leave your messages and thoughts below…