The Coral Rock Out At Their Latitude Acoustic Set

House Of Love also perform in the early evening in Suffolk 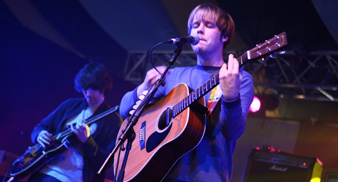 The Coral rocked up their acoustic set at Latitude today (July 19), previewing a number of new tracks in the Uncut Arena.

Beginning with the opening track from their 2002 self-titled debut, “Spanish Main”, the group performed tracks including “Who’s Gonna Find Me” and “Simon Diamond” using acoustic rather than electric guitars.

Throughout the set, however, the group increasingly began using electric guitars, until they ended their set with a new track, one of the heaviest songs The Coral have ever written.

Other new songs previewed included “The Roving Jewel” and “Being Somebody Else”, the band’s next single.

Perhaps helped slightly by a sudden downpour, the Hoylake five-piece filled the tent.

Following their performance, the reunited House Of Love took the stage, obviously delighted to be performing at Latitude.

Although they attracted less people than The Coral, those who attended were obviously devout fans, wildly cheering every song performed.

Highlights included “Christine”, “The Beatles And The Stones”, “Shine On” and “I Don’t Know Why I Love You”.