The Black Keys’ Patrick Carney: ‘I suck at the drums’ 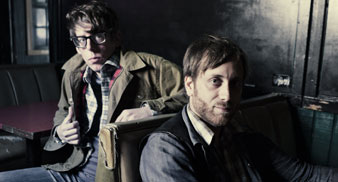 The drummer with the blues rock duo also went on to say that he agrees with fans who post comments online and on social networking sites about how ‘ugly’ he is. In an interview with Rolling Stone magazine, Carney said: “I suck at the drums, so it’s terrifying… Just trying to keep it together.

“I see a lot of comments on Twitter and stuff about how ugly I am, how bad I am at the drums, how awkward I look, and I’m like, yeah, I agree with most of those things.”

Last month, The Black Keys announced plans for a third show at London’s Alexandra Palace. Taking place on February 11, the show will follow the band’s two sold out dates at the same North London venue on February 9-10.

It was also revealed that Arctic Monkeys will support The Black Keys on a full arena tour across the US and Canada later this year. They will open for the Ohio duo on 15 arena shows in March 2012. The dates kick off in Cincinnati on March 2 and run until March 23, when the two bands will play the Constant Convocation Center in Norfolk, Virginia.

The Black Keys released their seventh studio album ‘El Camino’ on December 5, 2011. As well as the three shows at Alexandra Palace, they will play sold out shows in Edinburgh and Manchester.

To check the availability of [url=http://www.seetickets.com/see/event.asp?artist=the+black+keys&filler1=see&filler3=id1nmestory]The Black Keys tickets[/url] and get all the latest listings, go to [url=http://www.nme.com/gigs]NME.COM/TICKETS[/url] now, or call 0871 230 1094.