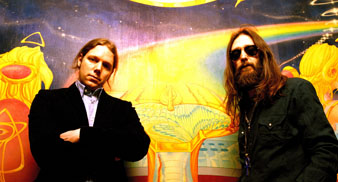 The Black Crowes are set to go on indefinite hiatus after celebrating their 20th anniversary with a special acoustic release.

The band are celebrating two decades since the release of their debut ‘Shake Your Money Maker’, and will releasing a new double-disc acoustic album reworking of some of their best-loved songs.

Called ‘Croweology’, the record will be released on August 3 and will be sold for the price of a single disc as a thank you to fans.

The band will then head out on a tour of the US dubbed the ‘Say Goodnight To The Bad Guys’ tour this summer, after which they are planning a lengthy period away.

Frontman Chris Robinson said: “With a smile so wide you can count my teeth and with a heart so full of love that it is spilling over the rim, I offer a humble and simple thank you.

“Thank you for your time, your imaginations, your heartaches and joy. Thank you for 20 years of cosmic rock’n’roll. 20 years of keeping it weird. 20 years of chasing horizons and before the band that dares to dream out loud puts it down for a while, we are proud to give you our ‘Croweology’. This year the music is only for you as we celebrate what has been, what is now and whatever will be.”