“When it came out people were like, ‘Where in the world did this come from? What kind of music is this?’” Robbie Robertson tells Uncut in an exclusive interview for this month’s cover story celebrating the 45th anniversary of The Band’s landmark debut album, Music From Big Pink. 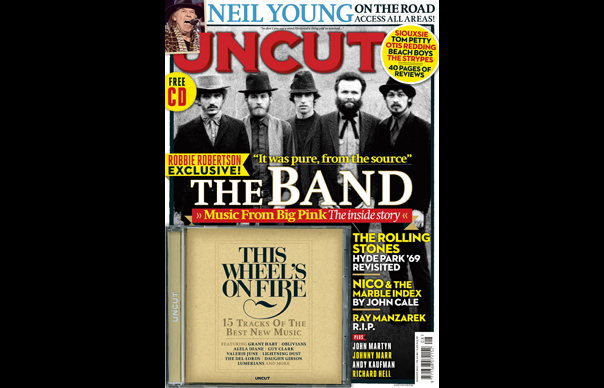 “When it came out people were like, ‘Where in the world did this come from? What kind of music is this?’” Robbie Robertson tells Uncut in an exclusive interview for this month’s cover story celebrating the 45th anniversary of The Band’s landmark debut album, Music From Big Pink.

“People acted like we were from another planet,” Robertson goes on, and looking at pictures of them from the time you’d have to say The Band looked at least like they belonged to another century, if not another world. And the way they looked was as ruggedly different as the album they had just made in the isolation of the Catskill Mountains where they had relocated with Bob Dylan after Dylan’s 1967 motorcycle accident.

The look for most rock bands at the time was rather more exotic and usually involved long flowing hair, lots of silk, leather and velvet, bracelets, bangles, bell-bottoms, capes, the occasional Cossack hat or something broad-brimmed with a feather in it, a kind of psychedelic dandyism, typified by, say, Jimi Hendrix. Alternatively, you had the brooding black leather and wraparound shades favoured by The Velvet Underground and eternally popular thereafter with sulky teenage malcontents.

What bands at the time generally didn’t look like were members of outlaw gangs from the Old West, characters from something like Daniel Woodrell’s Woe To Live On or the pages of Denis Johnson’s Train Dreams. In other words, no one else at the time looked like they’d ridden into town to rob a bank, raise hell at the local saloon or otherwise seemed to have stepped out of a sepia portrait of frontier life.

The music they made on Big Pink similarly made you think of times gone by or quickly vanishing, the album’s songs drawing on the richest traditions of America music – “from the Ozarks to the Mississippi Delta to the dustbowl,” as Robertson remarks. The album was a brilliant mix of gospel, spirituals, roadhouse blues, Southern soul and early rock’n’roll, out of which they created a magical new strain of American music.

Given their preference for sober threadbare suits, down-home threads, sharecropper waistcoats, battered hats and whiskers, it’s impossible to imagine, say, Garth Hudson or Levon Helm decked out in the kind of Mr Fish frock that a year later Mick Jagger wore when The Rolling Stones played their free concert in Hyde Park, an outfit you suspect they would have found more than a little outlandish and certainly not the kind of thing a man would be encouraged to wear in the sorts of taverns, bars and dance halls where The Band had served a gruelling apprenticeship.

Ahead of their return to Hyde Park this weekend, we revisit the Stones first appearance there in 1969, for eye witness accounts of the event from the people who put the show on, the bands who supported the Stones and members of the audience that day.

Elsewhere in the issue, we report on Neil Young & Crazy Horse’s recent UK tour, a series of dates that have divided Neil’s audience and led to much debate and comment on uncut.co.uk, John Cale recalls the making of Nico’s The Marble Index, an album that went as far out as rock has ever gone and Johnny Marr makes a special appearance in our regular Changes feature, for which he personally provided a picture of himself looking very sweet indeed at the age of 14.

We also have news of a massive John Martyn box-set, celebrate the return of The Scud Mountain Boys, confirm the line-up for the Uncut stage at this year’s End Of the Road festival, uncover an unheard album of very strange comedy by the late Andy Kaufman, while Richard Hell hosts this month’s An Audience With and Michael Chapman is the subject of this month’s Album By Album, while we also look at the making of Grandmaster Flash & The Furious Five’s pioneering “The Message”. There’s plenty, too, in the Uncut Review – with new albums from Grant Hart, The Beach Boys, Mavis Staples and Alela Diane, plus reissues form Otis Redding, Harry Nilsson, Big Star, The Teardrop Explodes and Cheap Trick.

The new issue of Uncut is on sale from Thursday, July 4. Write to me at the usual address with any comments, complaints and the like. Have a great week.