Band play London for the last time ahead of split 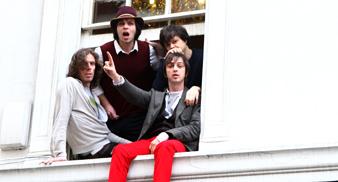 The band, [url=http://www.nme.com/news/supergrass/50616]who announced they are to split after the current mini-tour[/url], played their penultimate date, and their last on home shores, at the O2 Academy Brixton.

Fitting the occasion, the group performed a set that spanned their career, going backwards from their recent releases to their 1995 debut ‘I Should Coco’.

The band warmed the crowd up with the old public service films they co-opted on their tours in the late ’90s, including the infamous cartoon cat “Charlie” immortalised by The Prodigy‘s 1991 single. They followed that by screening a video montage tracking the band’s recent recordings, and then took to the stage to kick off with 2008 single ‘Diamond Hoo Ha Man’.

“We’re so glad you could come tonight, it’s the last time Supergrass play in the UK,” frontman Gaz Coombes declared ahead of ‘Rebel In You’ to a chorus of joke boos. “This is for you guys, to say thanks. I hope we can go out on a high.”

The band then briefly left the stage, screening another video montage tracking their trip to Rouen for the recording of their penultimate album ‘Road To Rouen’, before they returned to play tracks from that era, confirming the reverse order pattern for the night.

Highlights from 2002’s ‘Life On Other Planets’ followed next, again heralded by studio footage, as the band played the likes of ‘Brecon Beacons’ and ‘Funniest Thing’.

‘Moving’ and ‘Pumping Your Stereo’ were among ther highlights from 1999’s self-titled album, while the selection from 1997’s ‘In It For The Money’ included the title track and UK Number Two single ‘Richard III’.

‘She’s So Loose’ kicked off the closing ‘I Should Coco’ segment, which also featured ‘Mansize Rooster’, ‘Strange Ones’ and ‘Lenny’.

Leaving the stage briefly, Supergrass were soon back for an encore.

“It’s been a pretty fucking mental 17 years, or so, thanks for coming tonight,” declared Gaz Coombes ahead of ‘Alright’ and the band’s first ever single ‘Caught By The Fuzz’, which closed proceedings.

Drummer [url=http://www.nme.com/news/babyshambles/51373]Danny Goffey is then going to join Babyshambles for their forthcoming live dates[/url] to fill in for Adam Ficek who recently left Pete Doherty‘s band.