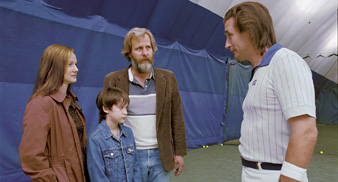 Trying desperately to stay sober, Uncut catches a number of excellent docs, starting with Why We Fight, from Eugene Jarecki, whose brother Andrew directed Capturing The Friedmans. It’s a more serious Fahrenheit 9/11, with Jarecki putting together a robust and frequently fascinating film chronicling the build up of the US military industrial complex since 1961 and the rise of the American empire. Taking its title from Frank Capra’s World War 2 propaganda movies, Jarecki’s doc features contributions from numerous political analysts, senators, soldiers and ex-CIA operatives. The subject matter is gripping, and Jarecki’s handling of it is supremely confident.

On a lighter note comes Inside Deep Throat, from the Party Monster team of Fenton Bailey and Randy Barbato. The story of the legendary 1972 porn movie, described by Bailey as “the original independent movie”, makes for fantastic viewing, driven by rare archive footage, plus talking head contributions from John Waters, Camille Paglia. Norman Mailer, Hugh Hefner, Wes Craven, director Garard Damiano and star Harry Reams. Despite this, the doc is frustrating for barely focussing on the Machiavellian part played by Chuck Trainor, the shady boyfriend of star Linda Lovelace, while the thorny issue of Mob involvement in the film’s financing and the whereabouts of the estimated $600 million profit barely seem to merit significant attention.

We got another extraordinarily good music doc – The Devil And Daniel Johnston, a brilliant and moving look at the tragic life of the great American independent musician, whose suffered from severe mental illness for much of his adult life. Johnston, often described as an indie Brian Wilson, and who’s influenced the likes of Nirvana and Teenage Fanclub, has been a tragic figure since he developed depression after his college years. This has seen him in and out of mental hospitals, experiencing delusions, hypermanic and psychotic episodes. Director Jeff Feuerzeig – who shot Half Japanese: The Band That Would Be King on Johnston’s occasional collaborator, Jad Fair – handles the subject matter with great tact, and what emerges is a solid, if very sad, portrait of one of the great heroes of American underground music scene.

The lives of dysfunctional high school kids seem to be one of the main themes of this year’s festival, from Brick to the wretched Pretty Persuasion. Thumbsucker, from promo director Mike Mills, is one of our favourites. Here’s why. Jacob (Lou Pucci) is a bright, but awkward teenager obsessed with sucking his thumb. Hypnotised by Keabu Reeves’ hippy dentist, Jacob goes into withdrawl, much to the concern of his parents (Tilda Swinton and Vincent D’Onofrio) and teachers. Put on medication, he soon begins to fulfil his academic potential – but at what cost? “You’re becoming a monster,” says teacher Vince Vaughn. Gentle and hip, with a handful of fine performances and a score featuring Elliot Smith and The Polyphonic Spree, this is sublime moviemaking.

One of the most anticipated films of this year’s festival was The Squid and the Whale, from Wes Anderson collaborator, Noah Baumbach. Set in Brooklyn, 1986, it has much stylistically and thematically in common with The Royal Tenenbaums: Jeff Daniels (in a role originally intended for Bill Murray) is the head of a family of intellectuals which is gradually falling apart as his wife’s (Laura Linney) writing career takes off and his hits a slump; there’s infidelity, too, with Linney shacking up with tennis coach William Baldwin, and Daniels’ embarking on a relationship with student Anna Paquin. Inevitably, the children suffer; youngest boy Frank starts spreading semen on library books and eldest boy Walt complicates matters by falling in love with Paquin. Quietly quirky.