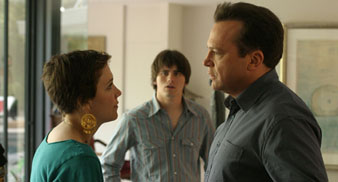 Greetings from snowy Utah! You join Uncut on day three of the Sundance Film Festival, founded by Robert Redford 21 years back and held in the remote mountain town of Park City. We’ve partied with Paris Hilton and Pamela Anderson at a David Lachapelle do and watched topless go go dancers shake their considerable booty at a bash for the Inside Deep Throat doc. We’ve bumped into Maggie Gyllenhaal in the street and waited nearly two hours for poached eggs in a restaurant with our new best friend, Nathalie Press from My Summer Of Love. Oh, and we’ve also seen some movies too…

The opening night movie was Happy Endings, a sprawling comedy from Opposite Of Sex writer/director Don Roos. It follows three loosely interlinked story strands, and stars Lisa Kudrow, Maggie Gyllenhaal, Tom Arnold, Steve Coogan and Laura Dern, whose lives are all thrown off kilter by sexual liasons past and present. Uneven and slightly too long to sustain the three separate storylines, it’s saved by a stand-out performance from Gyllenhaal as a vampish, manipulative money-grabber, out to rip off Tom Arnold’s widowed millionaire.

The first full day of the festival opened with a cracking doc, Rock School. Set in, um, a rock school for 9 – 17 year-olds in Pennysylvania. Run by real-life David Brent, Paul Green, the doc follows the students as they prepare to play a Frank Zappa tribute festival, the Zappanale, in Germany. There’s the nine-year-old Collins twins, 12-year-old guitar prodigy CJ, 17-year-old Quaker and coffee-shop singer Maddy, and brain damaged Will – who, despite his handicap, proves to be the most intelligent person here, identifying with unerring precision’s Green’s Peter Pan complex, vicariously living out his own adolescent fantasies through his students. A tactless, guileless egomaniac, prone to screaming at his students: “Doesn’t she have a Chris Robinson, future heroin addict look about her?” he snipes about one student. Ouch.

We were considerably disappointed with The Jacket, from Love Is The Devil director John Maybury. A poorly executed time travel thriller, with Adrien Brody as a brain damaged, amnesiac Gulf War veteran who may or may not have committed a murder. Incarcerated in an asylum, he’s subjected to unconventional experiments by Kris Kristofferson‘s sinister doctor. But then he starts flipping into the future, where he falls in love with Keira Knightley. Is he dead? Is he mad? Is it all a dream? A messy mix of Seconds, Jacob’s Ladder, One Flew Over The Cuckoo’s Nest and Donnie Darko.

Day one finished with Mexican movie Matando Cabos. A comedy of errors that owes much to Tarantino and Amores Perros, it’s a zingy, energetic thriller about two kidnappings which get fucked up when the inept kidnappers snatch the wrong men. Much confusion inevitably ensues and high farce turns to carnage. Despite wearing its influences large on its sleeve, there’s some highly inventive touches – including one surreal sequence shot entirely as a 1950s alien invasion movie – which, along with the zippy pacing, keeps you on its side.

Day two hits its stride with the fantastic Brick. It’s The O.C. does The Big Sleep, a film noir set in an American high school with hard-bitten student Brendan (Third Rock From The Sun‘s Joseph Gordon Levitt) investigating the murder of his girlfriend. It’s crammed full of fantastic, hard-boiled dialogue – “You still picking your teeth with freshmen?” – as Brendan follows a trail leading from the school clique to trailer trash dopers, all roads leading to local drug dealer The Pin (a superb performance from Lukas Haas), with Brendan playing all sides off against each other.

We’re also taken with Thomas Vinterberg‘s Dear Wendy, written by Lars Von Trier. A savage satire on the corrupting influence of guns, it’s set in a small mining community in America, where the town misfits – led by Jamie Bell – form a gang called The Dandies, “pacifists with guns”, fetishing their “secret passion” for their weapons in a disused mine and dressing in Regency garb. Echoes of Fight Club and The Wild Bunch abound, and you can’t help but be impressed by Vinterberg and Von Trier’s fearless dissection of the seductive power of American gun culture.

More jewels, this time in the shape of Steve Buscemi latest directorial offering, Lonesome Jim, a moving and funny drama with Casey Affleck returning to the family home “to have a nervous breakdown”. His mother is ferociously overprotective, his father, Cassavetes regular Seymour Cassell, a cold and distant figure. Even his elder brother is a dysfunctional mess – “If I’m a fuck up, you’re a goddam tragedy,” says Jim. When a suicide attempt leaves his brother in hospital, Jim is forced to help out at the family business and coach the local little league basketball team. Salvation arrives in the shape of Liv Tyler, a local nurse with whom he embarks on a clumsy affair. Tragedy cuts through the whip-smart comedy, with often painful results. “What did we do to make you so unhappy?” Asks his mother. “I guess some people shouldn’t be parents,” replies Jim.
Ouch.

Uncut‘s favourite film so far is the superb doc on Arthur ‘Killer Kane, late bassist with the New York Dolls, from debuting helmer Greg Whiteley. Kane had been living in near-poverty since the Dolls split in 1975, recovering from alcoholism and finding stability in the Mormon church, working in LA in their Family History Centre. Whiteley is Kane’s former home teacher, and when Kane decided to reunite the Dolls for Morrissey‘s Meltdown festival last year on London’s South Bank, he hit upon the idea of filming this doc. There’s extraordinary rehearsal footage shot in June, 2004 in New York as the Dolls prepare for their London date, and the dynamic between Kane and Dolls’ vocalist David Johansen, with whom he fell out bitterly in the mid Seventies, is electric. Contributions from Morrissey, Bob Geldof, Chrissie Hynde, Mick Jones and others illustrate how much goodwill there was for Kane, whose own life was mired in tragedy. The ending, following on from stunning footage of the Dolls’ Meltdown show, is incredibly poignant.