Suggs To Busk For Cancer Charity 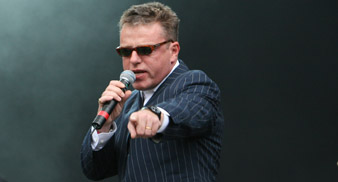 Madness singer Suggs is to join in a charity busking event to raise money for Cancer Research UK next month.

The nationwide event will also see Scottish singer Sandi Thom join musicians, artists and dancers on the streets between September 6 and 13.

Commenting on Busking Cancer, Suggs has said: “Playing music is such a joyful thing – it’s the soundtrack to our lives, to do it to help anyone whose life has been touched by cancer is fantastic.”

Busking Cancer was iniated last year, with a single event in London, the success of which has caused it’s expansion.

Charity event organiser Mark Warrick has said: “The launch last year was a storming success, so this year we are making it a nationwide event.

If you fancy having a go yourself, there’s still time to join up to participate, go here for more details: www.buskingcancer.co.uk