Singer says he has no intention of crossing “virtual picket line” 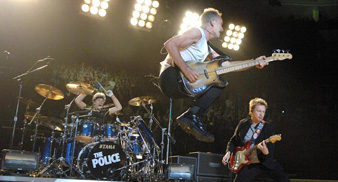 Sting has cancelled a scheduled live date in Kazakhstan because he doesn’t want to promote the country’s ‘repression’ of its oil and gas workers.

With workers in the country currently in the middle of a strike that has lasted for longer than 40 days, a statement was posted on the singer’s website revealing that he’d chosen to pull out of an appearance at Kazakhstan’s Astana Day Festival, which was due to take place tonight (July 4).

The statement reveals that Sting had recently been apprised of the situation in Kazakhstan by Amnesty International and, as a result, felt that playing the show would “be interpreted as an endorsement of the presidents’ administration and surely will go against everything he has stood for, while supporting Amnesty and the fight for human rights, for the past 40 years.”

A statement from Sting himself, meanwhile, said: “Hunger strikes, imprisoned workers and tens of thousands on strike represents a virtual picket line which I have no intention of crossing.”

“The Kazakh gas and oil workers and their families need our support and the spotlight of the international media on their situation in the hope of bringing about positive change.”