The former Fleetwood Mac singer releases her first DVD too 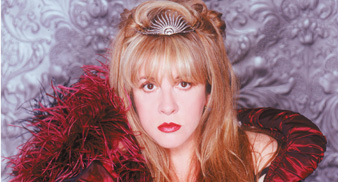 The former Fleetwood Mac singer is to release first DVD too

Stevie Nicks is to release a definitive song collection entitled “Reflections…The Best Of” in March. The retrospective spans two decades of Nicks’ musical career, from Fleetwood Mac and to her successful solo years.

“Reflections” will also include the first ever DVD compilation of Nicks’ videos and live performances, including duets with Tom Petty on “Stop Draggin’ My Heart Around” and with Sheryl Crow on “Sorcerer.”

Nicks’ Fleetwood Mac career is represented on “Reflections” with the original version of “Silver Springs”, a Deep Dish remix of “Dreams” and a live version of “Rhiannon.”

The full tracklisting for “Reflections” is:

1. Edge Of Seventeen
2. I Can’t Wait
3. Sorcerer
4. If Anyone Falls In Love
5. Stop Draggin’ My Heart Around (with Tom Petty)
6. Silver Springs (Fleetwood Mac original version)
7. Dreams – Deep Dish version
8. Rhiannon (Live)
9. Rooms On Fire
10. Talk To Me
11. Landslide (Live with Melbourne Symphony Orchestra)
12. Stand Back
13. Has Anyone Ever Written Anything For You
14. Planets Of The Universe
15. Rock And Roll (Live)
16. Leather And Lace (with Don Henley)
17. Edge Of Seventeen (Live with Melbourne Symphony Orch.)

Stevie Nicks has also been confirmed to play as part of the pre-game show at the upcoming Miami Superbowl on February 4 prior to four special shows at Caesars Palace in Las Vegas on March 20, 21, 23 and 24.