Thurston Moore speaks about band at solo show in London 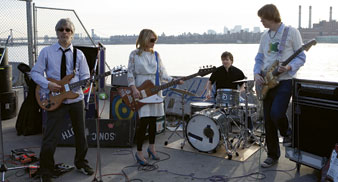 Thurston Moore has told NME that all the members of Sonic Youth will be getting together later this year with a mind to writing new material.

Speaking last night (May 31) backstage at an intimate solo gig at London’s Union Chapel he said:

“We’ll just gather and see what happens. We made the decision to have a good solid year of not doing too much as a band. We really decided to put the brakes on the juggernaut that was the band. We’d pretty much reached this decision before the gig we played on New Year’s Eve [at Hammersmith Apollo with Factory Floor, Shellac and The Pop Group]. We just wanted to regenerate. I like doing shows like New Year’s Eve where we just play a catalogue of what we do but at the same time I feel [when we do this] that people have decoded us.”

“It’s like they know what we’re about, like there isn’t a question mark hanging over the audience any more. Like they’ve figured it out and they appreciate it.” He added: “That’s totally fine and those gigs are totally fine but they’re also a bit business as usual and that kind of turns me off a little bit. So I wanted to back away from that for a while and do other work.”

A big part of that “other work” this year has been recording the ‘Demolished Thoughts’ album, with the assistance of Beck, which came out on Ecstatic Peace/Matador last week.

Showing off his new ‘unplugged’ line-up in the UK for the first time, which features a harpist, violinist, jazz drummer and two acoustic guitars, he led his band through an almost complete rendition of the new album.

At the end of the evening he sheepishly admitted that they’d forgotten to do the song ‘Orchard Street’ and had to tag an extra encore on to the end of the gig to include it. “The main set felt about three minutes and two seconds too short to us, we couldn’t work out what was going on”, he joked when he got back on stage.

Moore also invited the entire audience to come and spend their summer holidays with him and Kim Gordon at their home in West Massachusetts at the foot of the Berkshire Mountains. And he also treated audience members to the rendition of a poem which contained the memorable line: “Hey Babe, come over to my house and help me alphabetacize my noise tapes.”

The evening ended with a stirring rendition of ‘Psychic Hearts’, the song that Chan Marshall, aka Cat Power, claimed should be played at the beginning of every school day.