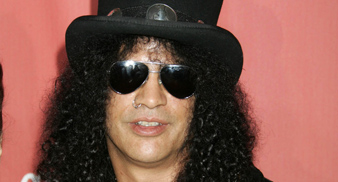 Speaking to the New York Post, the guitarist said that the album was “exactly what I would have expected from the final years of us working together, and seeing where he was headed musically. It’s very heavy, sort of a dark, depressing record. He’s fucking phenomenal”.

Slash, who left the group in 1996, seemed to think it was unlikely that he would reunite with Rose and the band any time soon.

“I’m more stand-offish because I know how vehemently he hates me,” he explained. “So that sort of makes me doubt it. But if we ran into each other and all that animosity were to pass for a second, then I’m sure we could have an interesting conversation.”

Guns N’ Roses headline the Reading And Leeds Festivals this August along with Arcade Fire and Blink-182.