Siouxsie and the Banshees Founder To Perform Rare Solo Gig 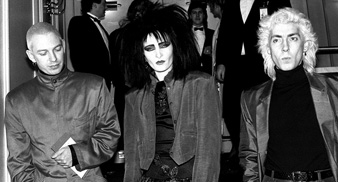 Siouxsie and the Banshees co-founder Steven Severin is to play a rare solo show in Edinburgh this May.

The show at the Voodoo Rooms on May 3 will see Severin perform two very sets, the first being the premiere of his brand new score to 1928’s surreal classic film ‘The Seashell and the Clergyman’.

The film also known as ‘La Coquille at le Clergyman’, directed by Germaine Dulac was originally banned by the BBFC, and will be projected at Severin’s show alongside the live score.

The latter half of Severin’s two part show will see the musician play a selction of his scores to short films by Aura Satz, Bruno Forzani and Helene Cattet.

The past few years has seen the former Banshee publish a collection of poetry ‘The Twelve Revelations’ as well as oversee the remastering of the Banshees back catalogue as well as writing TV and film scores.