'Inni' will be released this November 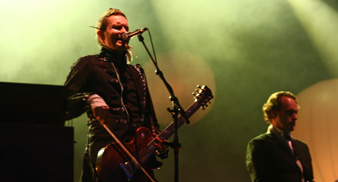 Sigur Ros are set to release a double live album and film from their last shows, which took place in 2008 at Alexandra Palace in London.

‘Inni’ will be released this November through the band’s label Krunk and documents the Icelandic group’s final two shows before going on their ‘indefinite hiatus’ at the end of their world tour following the release of their fifth album. The live release features the whole show, with just one song omitted. The accompanying 75-minute film – directed by Vincent Morisset – will debut at the Venice Film Festival on September 3.

Inni is the band’s second live film, the first being 2007’s Heima, which documented a tour of their native Iceland. Director Morisset re-filmed the original digital footage on 16mm film, which was then refilmed again, through prisms and found objects. Footage of the band from 1998 onwards also features in the film.

The exact release date of ‘Inni’ will be revealed later in the year.