The films also set to screen in London, UK tour starts this week 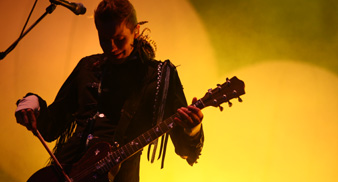 The first is a “transcendent piece of cinema” filmed in Iceland, America, Mexico and the UK, and is set to the band’s music. The second film is a documentary, recorded live at Abbey Road Studios with Sigur Ros performing their piece ‘Ára bátur’ accompanied by a 69-piece orchestra and 20-piece choir.

The films, both directed by Nick Abrahams will also screen at London’s Covent Garden on November 10.

The special deluxe, numbered, editions of the album, as well as including the films and the now banned video for single “Gobbledigook” will also come with a 196-page cloth bound book of photographs shot by Eva Vermandel.

For more information about the films, the deluxe album edition
and more, see: www.sigurros.com

You can also see Sigur Ros live at the following venues this month: