This year's bash takes shape -- tickets are on sale now! 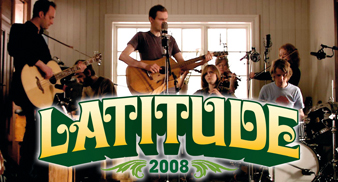 Sigur Ros and Interpol have been revealed as the two headliners who will join previously announced Franz Ferdinand at this year’s Latitude Festival.

Icelandic post-rock experimental group Sigur Ros are currently finishing up their fifth studio album with Smashing Pumpkins‘ producer Flood in Reykjavík and haven’t played an outdoor show in the UK since 2006.

Returning to the UK after two sell out shows at London’s Alexandra Palace late last year, Interpol, the New Yorkers who released their third album ‘Our Love To Admire’ last year will also top the bill at Latitude this year. Closing the festival on Sunday night (July 20), this will be Interpol’s only UK festival appearance in 2008.

Other artists confirmed so far for Latitude are The Breeders, Elbow, Death Cab For Cutie, M.I.A and Amadou and Mariam.

This year’s Latitude Festival will also see UNCUT hosting our own stage, for the third year running.

Of course, Latitude Festival is not just about music, but will also be putting on the best in comedy, films, books, theatre, poetry and cabaret over the three days.

The Music and Film Club Arena will see performances from the Buzzcocks and Barry Adamson as well as involving BAFTA again organising film Q&A’s with directors and special film screenings.

Iain Banks, Hanif Kureishi, Irvine Welsh, Mike Gayle, John Burnside, Simon Armitage and even New Order’s Peter Hook will all be performing in the Literary Arena. Hook will be reading from his How Not To Run A Club, while Iain Banks will be dipping into The Steep Approach To Garbadale.

There’s theatre, too, from the Royal Court Theatre, Paines Plough Theatre and the Nabokov new writers theatre company, plus 50 Ways To Leave Your Lover, a series of plays from the Bush Theatre based on the personal experiences of Latitude festivalgoers and UNCUT readers.

Tickets for this year’s event are £130 for the four day event, with day tickets costing £55.

Information and tickets are available from the official Latitude Festival website here: www.latitudefestival.co.uk.

We’ll see you there!