Scott Walker: “He wanted to rip your ears off!” 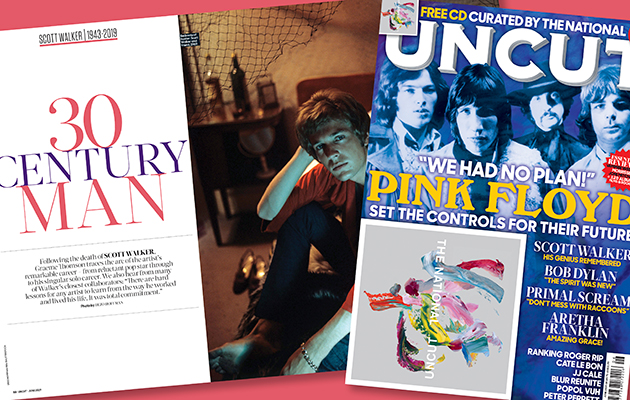 The current issue of Uncut features a comprehensive tribute to the great Scott Walker, who died in March.

Among those helping to illuminate the career of this intensely private musical icon is producer and engineer Peter Walsh, who worked closely with Walker on his remarkable later albums, from Climate Of Hunter to Soused.

“Before recording Climate Of Hunter I hadn’t heard any demos, so wasn’t totally aware that Scott was heading in an experimental, avant-garde direction,” says Walsh. “My intention was to capture that voice, to echo The Walker Brothers days. That was the guy I thought I was recording! I’d suggest harmonies that linked back to what had made him popular and he’d say, ‘I know what you’re trying to do, but…’ I quickly realised that we were making a different kind of record. He looked forward. I would mention stuff on previous albums and he’d kind of forgotten about it. He wasn’t referencing the past at all.

“Every album started with a full day in the studio playing demos and discussing sounds and colours. We worked closely with a musical director – first Brian Gascoigne, then Mark Warman – who would then transcribe the music. In the early days, they scored the songs based on  these conversations, and using Scott’s personalised method of notation. Later Scott started using a digital keyboard and he’d build the songs with the help of the internal sequencer. We would  take that information as the starting point of the album. The end result would be a lot more human, more pulsing and sonically embellished. He was a fan of a big sound, a wide soundscape.

“He really loved making his music in the studio. It was always fun, and a privilege to sit next to him, but it was concentrated, committed work. I remember with guitarist James Stevenson, he said, ‘You’ve got to sound like an animal wailing. Just fucking rip the shreds out of this thing.’ He was searching for something and never stopped until he was absolutely sure that he’d got it.

“Lyrics weren’t really discussed until just before the vocal recording. I wouldn’t be aware that we were shadowing any particular lyric with the musical textures, but he was. I did occasionally ask about them.

“Tracks like ‘Clara’, with the meat punching, at some point you have to say, ‘Listen, Scott, what is this all about? I’m not getting it. And the knock on the door, what’s that?’ He would say, in a quite light-hearted way, ‘Well, that’s when he comes into the room…’ as though you should absolutely know that already! To him, it was all quite logical.

“When the vocal went down, that was when you would finally realise how it all stitched together. On a track like ‘The Cockfighter’, you think, ‘How do you get a vocal through all that metallic percussion without ripping people’s ears off?’ Then I realised, he wants to rip people’s ears off!

“In the 36 years that I recorded his vocals, there was never anyone else in the control room – just me. He used to come in and avoid conversation, preserving his voice, so that his performance would have that deep, early-morning bass sound. It was always a very concentrated process, and a very personal interaction.

“He was hugely intellectual, very knowledgeable about history, literature, cinema, classical music – but at the same time he would get engrossed in a tennis match. He was a complete gentleman, loyal, trusting and very private. I respected that.

“I’d meet him for a glass of wine now and again, but I can count the times on one hand. We had a very nice email relationship. My last email from him was in mid-February and he sounded good. He was trying to work out a way of doing the next record, trying to organise what it was about. He certainly had no intention of stopping, I’m sure of that.”

You can read much more about Scott Walker in the current issue of Uncut, in shops now or available to order online by clicking here.