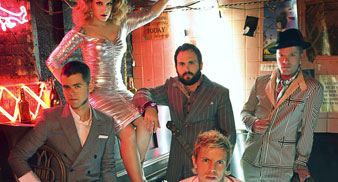 Uncut’s favourite retro-futurist glam-pop troupe Scissor Sisters, currently Top 3 in the charts with their latest album “Ta-dah”, have announced that they’re to play a Halloween show at the end of the month.

The gig, on October 31st, will be at London’s Brixton Academy, and has been organised in association with charities Global Cool and Oxfam.

Naturally, being a Scissor Sisters party, it is likely to be a colourful event. An announcement on the band’s website warns, “Fancy dress is required!”

Tickets are available from the Global Cool website on Friday from 9am.

The band have also announced two other dates: they play Manchester Apollo on October 30 and Glasgow Barrowlands on November 20.