Ryan Adams Rides On With America 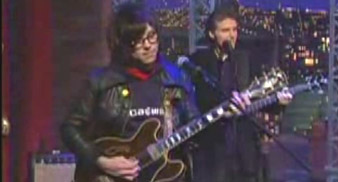 Prolific alt.rock musician Ryan Adams has appeared with US country rockers America- they of “Horse With No Name” fame-on The Late Show With David Letterman.

But Adams’ involvement with the band doesn’t end there: he also contributes guitar and backing vocals to “Ride On”, a standout track on America’s new studio album, “Here & Now” – the group’s first since 1984’s “Perspectives.”

In fact, the band’s new LP is crammed with surprising star names. James Iha, formerly of Smashing Pumpkins, co-produced the album along with Fountains Of Wayne’s Adam Schlesinger.

Other notable artists contribute too. Ben Kweller (who also guested on Letterman with Adams), Matthew Caws and Ira Elliot of Nada Surf and Jim James and Patrick Hallahan of My Morning Jacket all make an appearance.

“Here & Now” even includes cover versions of songs by the contributors- America have a crack at Nada Surf’s, “Always Love” and “Golden” by My Morning Jacket.

The veteran rockers have announced an eight-date tour of the UK, starting in London in March. There’s no telling which guests might spring a surprise visit!

See the video of the Letterman show here – Check out Ryan Adam’s ‘sha-la-la-las’!